Way up north stands the tallest mountain of them all, the snow-capped Chermon which rises to an altitude of 2,800 meters. In fact, the Torah (Devorim) tells us that it had three other names as well; Snir, Sirion and Shion. Rashi explains that this comes to prove the great glory of Eretz Yisroel; each nation wanted the mountain called by his name. The Ramban says that perhaps these names are names given to this mountain in previous times or perhaps different nations occupied different parts of the mountain, each giving his territory a different name. During the winter months and into the spring it’s covered with snow and serves as Israel’s only ski resort. In fact, the very name Snir means snow which is probably how it got its name. The Arabs call it Jabel A-Taleg, which means Snow Mountain. Even during the summer months, one can enjoy the chairlift that takes you to the top. It’s nice and cool even on the hottest days. 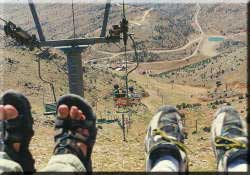 As the snows melt during the spring, the waters form the river Snir which continues to flow into the Yarden River.

There is one spot upon the mountainside (Har Dov) which, tradition has it, is where the “Bris bain habesorim” took place. (This refers to Hashem’s convenant with Avraham to eventually take us out of Egypt and bring us into the Promised Land, as mentioned in parshas Lech L’cha).

At the very base of the mountain there is a large pool of water called Birkat Ram. The water comes to this pool from the Chermon and resurfaces from the springs below. Some say that it continues underground and resurfaces at the Panyas (Banyas) springs.

While driving up the road leading to the Chermon, one sees an ancient fortress standing on the mountainside. This is said to have been built by the Crusaders and probably has nothing to do with Nimrod.

← The 25 Best Jewish Loopholes
A Disaster of Historical Proportions →