A recent Kol Korei came out stating that VosIzNeias.Com (VIN), a Haredi blog/news source, has been banned by a slew of Rabbis due to the Lashon Hara (even though the news may be true) that it perpetuates. 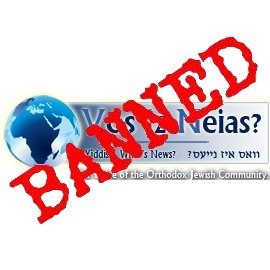 This is interesting in that VosIzNeias gets into trouble for spreading news, while more venerable papers like the Jewish Press (Jewish Mess/Jewish Depress), the Jewish Week, the Yated, and Hamodia don’t get into this trouble even though the news they spread may be construed as Lashon Hara.

Some of the names placed on this Kol Korei (keep in mind that I didn’t say “signed”) were:

I believe that this ban was targed at VosIzNeias because it’s internet based, and the internet today, like the car/cellphone/etc. of yesterday, has posed a threat to “the way things were.” Also, having previously followed the last ban on Haredi Websites last year (interestingly this was last January, which would make it “that time of year” again, I guess), I am beginning to question how seriously one should take these “Kol Korei’s.” 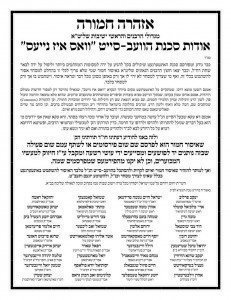 Therefore, we now have a larger problem in our hands. Many of these high-ranking Rabbis learn 24/7, raise families, give Drashos, eat, and sleep. They don’t have the time to do the Chakira (research) involved before determining what to ban and when. They don’t have the time to weigh the potential financial consequences in issuing these bans (example: mixed seating in concerts with Lipa/MBD etc.).

I suspect that zealous Talmidim ask their Rabbis all sorts of questions, annoying them to death, until these Rabbis, in an effort to shoo them away, say “yes, whatever you want!” That then gives these Talmidim licence to post these prohibitive bans, making everyone unhappy, and making these Rabbis look bad for “focusing” on stupidities.

My basis is that, while I’ve never been Zoche (had the merit) to meet R’ Elyashiv (not involved in this particular Kol Korei but has been in others), but have seen and heard about him learning non-stop. R’ Elyashiv for one is a busy man who is focused on matters outside of this world, therefore why would he focus on this Naarishkeit that only can hurt more than it can help?