The following was found from the Muqata blog [1]:

After years of researching documentation, Yossi Hertzberg and Israel Stepansky are convinced that they know where Reuven, Shimon, Levi and Dina — the children of Jacob are buried. 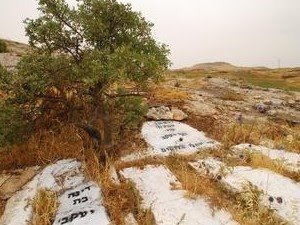 A pair of scholars are convinced that the graves were located on the Arbel — Jacob’s children – Reuben, Simeon and Levi and their sister Dinah. Israel Hertzberg, an Orthodox Jew from Jerusalem, and Yossi Stepansky, formerly a senior archaeologist for the Northern District of the Israel Antiquities Authority conducted a study that lasted 11 years and included collecting and validating records of the sources of 120 pilgrims’ journey logs from the past 200-1000 years.

They were entitled to investigate rare documentation at Israel’s National Library at the Hebrew University in Jerusalem, where they found documents and dates of visits to the tombs by Jewish tourists. Joining their research was Israel Meir Gabbai, Chairman of “Ohalei Tzaddikik” or organizations which deals with rebuilding tombs and their research was approved by the chief Sephardic rabbi of Israel, Rabbi Shlomo Amar.

“In the Writings of the Ramban and in all the ancient travel diaries of pilgrims, they described the same path of visiting the graves of Reuben, Simeon, Levi, their sister Dinah, and even of Seth, Adam and Eve’s child,” said Israel Herzberg — the journey went from the grave of Nabi Shuaib to the Arbel [mountain].

In journals, its describe how the graves of the righteous see the magnificent high synagogue, and the tombs are North of the ancient village, where the synagogue is located in the center.

According to records there is a cave with stairs leading down it it,to the grave of Seth and he was near the tombs of the tribes in the field which have large markers. Pilgrims describe Dinah’s grave as having a myrtle/Hadas bush growing out of it.

Since in the modern era, that area is not plowed, it took them six years to find the graves. When we arrived we were amazed to discover in the cave, the Hebrew names of these pilgrims were engraved, dating back some 600 years ago.

Hey, anything is possible!