I’ve recently come across the above YouTube video, although the video itself is at least a year and a half old. Here we see Rav Moshe Feinstein’s son in law, Rav Moshe Tendler, ascending the Har Habayit (Temple Mount), as per Rav Moshe’s teachings. The very thought is mind blowing!

Among some interesting points of the video:

1. Rav Tendler mentions that the Makom (place) is only Kadosh (holy) if the person has prepared himself to accept the Kedusha. Otherwise the place won’t have any bearing on the person, hence bathing in the Mikvah before going in. He points out that the Kohen Gadol similarly had to prepare himself to enter the Holy of Holies.

2. Past generations couldn’t go up since they weren’t prepared, as per point 1. The Kotel HaMaaravi, for example, used to be a place of wailing and kvetching. Now, it’s a place of Simchas, Kenana Hara.

3. Rav Tendler pointed out that the place was built out of Jewish homes to make the space for the mosque of Omar (the Al Aqsa mosque). To show that the place was Jewish at some point, he pointed a Mezuzah placer engraved inside one of the stones. Bending down, he gently brushed away the dirt from one of the blocks, revealing the cavity wherein once nestled the holy scroll of a mezuzah—the Jewish prayers that are written on special parchment and posted on the entryway to each room in every Jewish home in accordance with the Torah commandment to “post them on the doorposts of your house and upon your gates, that ye shall remember and do all My commandments and be holy unto your G-d.” (source)

To put it mildly, this is wild, and can potentially change the attitude we’ve taken thus far with regards to certain rituals.

Could widespread usage of Techeles in Tzitzis be far away? I’ve always said before that radical changes like these will only be widespread if Gedolim like Rav Moshe Feinstein, Rav Aharon Kotler, et al would adopt this practice. Here we see Rav Tendler, who was fairly close to Rav Moshe, taking a radical stance. 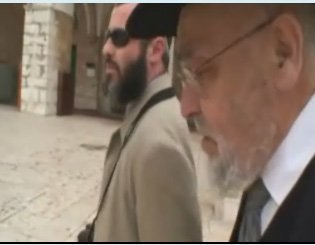 Interestingly though, Rabbi Tendler contends that his father-in-law, the famous Halachic-decisor Rabbi Moshe Feinstein, was well aware of his custom to go up on the mount and never dissuaded Tendler from doing so. A copy of a responsa issued by Rabbi Feinstein affirming the halachic right of Jews to go up the the Mount can be found on the Temple Institute site.

Perhaps this could take us a step closer to receiving Moshiach and the third Bais HaMikdash.