On Friday, Arutz Sheva mentioned that in the Israeli Yishuv of Itamar in Samaria, some Fatah ‘Freedom Fighters’ went on a butchering spree, stabbed the Fogel family’s sleeping three year old in the heart and slashed the throat of his three-month-old sister. 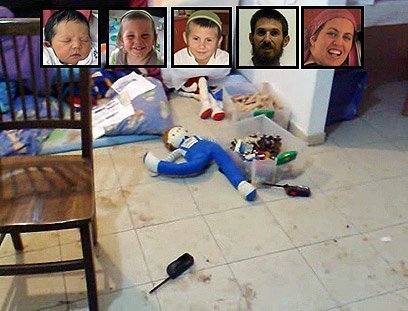 Taken from the site:

The IDF and police forces are conducting widespread searches in the vicinity of the community since the barbaric terrorist murder of five members of the Fogel family in their home on Friday night.

It is not yet clear how many terrorists took part in the massacre. About 20 Arabs have been arrested up to now.

One area in which the IDF is concentrating its investigations is whether there were any intelligence warnings of terrorist plans before the attack that might have alerted residents.

In addition to an electronic fence surrounding the community, there is an inner, coiled wire fence. The community is allotted six non-army security personnel from a recognized security firm who are on patrol all the time. All signals go automatically to a central operations room in the town staffed by two of these guards, and in addition there is a company of soldiers on the adjoining hill.

The IDF investigation of the attack has discovered that at 20:59, terrorists entered the community. They jumped over the fence and an alert sounded. The guard on duty went to the spot from which the warning was heard, but saw no evidence of infiltration and therefore, made the erroneous decision that an animal had activated the electronic fence’s warning signal. There are many false alarms of that nature in the winter, but cameras would have shown the terrorists. However, the IDF did not agree to fund a request to keep cameras working on the fence.

The terrorists first entered one home, which was empty. They found a weapon there, which they do not seem to have used. A group of youngsters was having a Sabbath evening party at the Fogel house nearby, and at 22:20 they left, along with the Fogel’s 12-year-old daughter, for an activity at the local Bnei Akiva youth group.

Between 22:20 and 22:30 the terrorists entered the house through the living room picture window, did not notice the 6-year-old boy sleeping on the couch and continued on to the bedroom where they slashed the throats of the father and newborn baby who were sleeping there. The mother came out of the bathroom and was stabbed on its threshold. The evidence shows that she tried to fight the terrorists.

They then slashed the throat of the 11-year old-son who was reading in bed. They did not notice the 2-year old asleep in his bed, but murdered the 3-year old with two stabs to his heart. After that, they locked the door, exited through the window and escaped.

Exactly two hours after the infiltration, there was another warning signal from the same spot on the fence, as the terrorists left the way they had come. Once again, the patrol did not identify the source of the signal as infiltration.

The 12-year-old daughter returned home at 00:30 and found the door locked. She asked a neighbor, Rabbi Yaakov Cohen, of the Itamar Yeshiva, to help her. He brought a weapon with him once he noticed tracks and mud near the house. The two woke up the 6-year old sleeping in the living room by calling through the window and when he opened the door, the Rabbi returned to his home.

When she entered the bedrooms, the young daughter saw the horrific bloodsoaked scene and ran out of the house screaming. The neighbor ran back and fired several shots in the air to alert security personnel. Within a short time, large police and IDF forces arrived and began intensive searches to see if the terrorists were still in the community. At 03:30 a.m., military trackers discovered footprints leading to the Arab village of Avrata.

Defense Minister Ehud Barak held a situation meeting in IDF Tel Aviv headquarters. Attending were the Chief of Staff, ISA head Yuval Diskin and other high ranking IDF intelligence and security personnel. Barak instructed those present to use every means at their disposal to find the murderers as quickly as possible. He called on the leaders of the Palestinian Authority to condemn the murders and on the Judea and Samaria Regional Authority Heads to exercise restraint.

Due to the graphic nature of the photos, here’s a link to some photos of the murder victims, courtesy of Arutz 7. WARNING: THESE PHOTOS ARE EXTREMELY GRAPHIC AND ARE NOT SUITABLE FOR MINORS!!!

Celebrations of the Aftermath

To add to this, it was released on Undhimmi.com that in response to this massacre, a number of Palestinians started handing out sweets in celebration. This is something they do best; they make a Yom Tov out of killings and massacres. 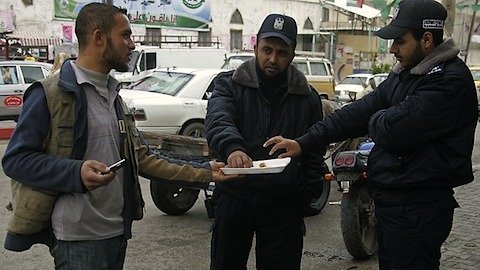 How should civilized society respond to the cold blooded murder of a 3 month old, her siblings and parents? “Condemn” is not a strong enough word or action.

This isn’t talk, it’s real life. Three kids started the weekend with a happy family and ended Saturday night with shattered lives. I’m beyond knowing what to say or how to respond. This is revolting.

The Western world needs to realize that there will never be peace with these vicious and heartless beasts. To kill innocent civilians on a day of rest while unarmed, and to murder innocent children, shows how animalistic these “people” can be. Words can’t describe them. There’s no rhyme or reason anymore, and there hasn’t been in who knows how long.