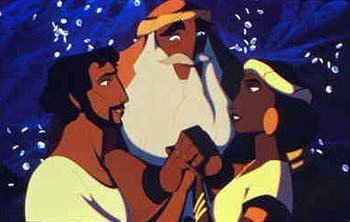 The Sefarim note some fascinating parallels in the relationship between Moshe and Yisro. Judaism fully endorses the concept of Gilgul, reincarnation, and that it refers to the soul returning again to earth in a different body in order to complete its perfection.

The first two brothers ever were Kayin and Hevel. According to the Midrash (or Sefer Gilgulim – the book of reincarnation), Kayin and Hevel has 3 sisters. Kayin was married to one, and Hevel was married to two. One of Hevel’s wives was particularly beautiful, and Kayin wanted her for himself. Kayin therefore killed Hevel in an attempt to steal Hevel’s wife. Thus, Kayin was guilty and needed forgiveness for murder and adultery. This supposedly was the real motive behind the killing.

Kayin’s Korban not being accepted was the start of things and Kayin was incredibly jealous of Hevel. Afterwards essentially Kayin said “Les Din V’Les Dayan,” “there is no justice and there is no Judge.”  that he killed him over it. Like many things in life, which revolves over either money or women, this case revolved around a woman.

There were other things that Kayin did to make Hevel miserable. He started to nitpick who got what. In the Torah it says “And Kayin said, and he pursued him.” What did Kayin say? It’s missing a line! Apparently, Kayin said that the world needed to be divided. Since he was the first-born he should get double and therefore should have 2 out of the three sisters. He also said that since he works the land, the land should go to him and Hevel should feed his sheep out of air, but get off his land! Since that wasn’t possible, he was pursued until he was killed.

Now, Moshe was a Gilgul of Hevel. Hevel’s sin had been that he had looked at the Shechina when Hashem came down to accept his offering. Moshe thus got forgiveness for this by turning away from viewing Hashem at the burning bush.

Kayin’s soul though went through some reincarnations in order to perform two Tikkunim. One was for killing his brother and one was for stealing Hevel’s wife in the process.

First, the soul was reincarnated into the Egyptian that was beating a Jew to death, since the Mitzri’s natural tendency from Kayin was to kill. Moshe (Hevel) performed the Tikkun by killing the Mitzri (Kayin) when this Mitzri was beating the Jew in order to violate the Jewish slaves’ wife Shlomis Bas Divri (source: Rashi), a la Kayin beating Hevel over his wife.

Yisro was the next stop. Shortly after the Mitzri was buried, Kayin’s soul then “zapped” into Yisro and he no longer had a desire for idolatry.

Interestingly, Yisro (Kayin) finally gave Moshe (Hevel) a wife (Tzippora his daughter) after stealing Hevel’s wife! This is why Yisro brought Tzippora back to Moshe and was very interested to see that they stayed married.

An interesting proof to Yisro (Kayin) returning Moshe’s (Hevel) wife is seen in the beginning of Parshas Yisro. The Parsha clearly starts off with Yisro being the father-in-law of Moshe. A few verses on, Yisro starts off by saying to Moshe, “I am your father in law Yisro, I come to you with your wife.” In Hebrew it says:

However, it seems extra to say “I am your father in law Yisro.” Moshe knew that already! It’s like I’m telling you, “By the way, you should know that I am the blogger, I come to you with my post.” The Torah doesn’t say anything extra. Just say “I came to you with your wife.”

The answer to this problem according to the Zohar is as follows. Look at the first three words “אני חתנך יתרו” and read the first letters. They spell “אחי,” or “my brother.” Therefore, re-read it like this:

Or, “My Brother (Kayin), I return to you with your wife.”

There’s more. As a “tikkun” for Moshe’s supposed “stealing” of Kayin’s land, Moshe (Hevel) tended Yisro’s flocks in the desert, which everyone contended was no-man’s land.

There’s more, but is that wild or what?

This Geshmack story is heavily inspired by Rabbi Eli Mansours’ speech here. The video is here.