Israel’s Haredi communities have done everything to keep things kosher and Internet Free. A while back there was a brouhaha over all Torah related websites being banned and thereby giving license to make the internet completely Treif. Seeing that this method doesn’t work, different tactics have been taken. 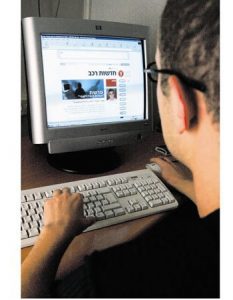 Recently, YNet (http://www.ynetnews.com/articles/0,7340,L-4083039,00.html) reported that in Modiin Illit, a Kosher cybercafe was opened up a short while ago at the consent of numerous Charedi Rabbis. They finally reached a realization that the Internet is needed for businessmen and to take it away completely is simply not practical. Faxes and telephones are already passe and B”H the Rabbis realize this.

In the Israeli Haredi community, cellphones with internet access poses a problem for those that don’t want to be exposed to the outside world. Apparently the market was sizable enough to warrant a company that specializes in Kosher cellphones. Some of them are even in Yiddish!

← Yogurtys Has (No) Kosher Frozen Yogurts in Toronto!
Torah Proofs with Jeff and the Rabbi →