This interview, originally from the blog Rationalist Judaism [1], was translated by Joshua Skootsky. 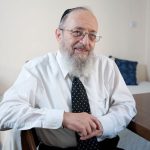 It was nine years ago that the book of Rav Nosson Kaminetsky caused a huge storm in the Hareidi community, and it was banned by leading Rabbis. Now, in an interview, he attacks those that banned him and the decision making process within the Hareidi community. “We must remove from our midst those who surround Torah Greats [askanim].”


This week’s guest to Walla!’s “Interview the Rabbis” series is Rav Nosson Kaminetsky, who in the last few years has been the target of bans by the Lithuanisn-Haredi Rabbinate, as part of the struggle over his book “The Making of a Gadol,” which dealt with the biographies of American Haredi leaders in the 19th and 20th centuries. Rav Kaminetzky, the son of one of the greatest American rabbis, Rav Ya’akov Kaminetsky, was born in 1930 in Lithuania. In 1938 his family immigrated to Canada, and eventually moved to Brooklyn, New York, in 1945. There, he received his education at Yeshiva Torah Vodaas, Beit Midrash Elyon, and Beit HaTalmud. In 1968 he made aliya to Israel, and was one of the founders of Yeshivat ITRI in Jerusalem, retiring in 2000.

[2]With his 2002 publication, Rav Kaminetsky stirred up a huge storm among the Hareidim: going against the grain of modern Hareidim, who relate to the greatest Rabbis as holy and pure from birth, referring to them as “Gedolei Yisrael” and “Gedolei HaTorah,” Rav Kaminetsky set out with a preference to tell the historical truth, to describe the life story of the leading [Hareidi] Rabbis after the Holocaust, with their flaws and less glorious sides. For example, he described in his book the letters Rav Ahron Kotler, one of the great Rabbinic leaders in America after the Holocaust, to his fiancée, and the negative reaction of his father in law to those letters, and also he described the love of his father, Rav Ya’akov Kaminetsky, for foreign languages, which from a strict Hareidi point of view is an inappropriate field of interest.

Rav Nosson Kaminetsky believes that for hundreds of years, Lithuanian Hareidim disapproved of descriptions of rabbis as totally holy, in contrast to the tendency within Hasidic circles to view their Rebbe, as well as his successors, as saints of the highest order. These beliefs have caused a series of leading Hareidi Rabbis, including the leading Lithuanian posek, Rav Yosef Shalom Elyashiv, to ban his book, and the Hareidi “street” has reacted to the book with similar responses. In 2005, Rav Kaminetsky tried to publish a revised version of the book, but the book was again banned.

What caused you to publish your book, which shattered myths surrounding Hareidi rabbis?

“That was not my intention. I did not set out with the goal of waging war on people’s points of view, or to indoctrinate anyone. I wrote my book because of my desire to describe something unique that the world did not know about, and I had a connection to that uniqueness through my father. I did not want their unique world to be lost to oblivion. That was all that I intended to do with my book. Maybe that was my reaction to the Holocaust, that I wanted something to remain from the world of my uncle.”

Nine years have passed since the publishing and banning of your book. Are you still a little hurt?

“Absolutely. I still feel hurt. Someone died, who everyone called the ‘Tzadik HaDor’ and ‘Gaon HaDor,’ Rav Michal Yehuda Lefkowitz, Rosh Yeshivat Ponevitch L’Tzeirim, who hurt me and called for me to be banned in letters that he wrote. Since he died, I have continued to feel anger towards him, and I certainly am still angry with those still living who issues bans against me.”

Do you agree with the accusation that the “leading Rabbis” who banned you are too old, and practically speaking are controlled by those surrounding them?

“It is a general principle that a person does not see their own faults. Old scholars have extra knowledge, have more life experience, and more wisdom. If they are not functioning, they do not have a duty to step out of the spotlight, it is the public’s duty to remove them. A man does not see himself as old. If there are those that take advantage of this for the worse, and presumably there are those who do so, because there are many crooks in the world – this is not the problem of the Torah giants, this is the public’s problem. The public needs to know when to take exception to them, and when to follow in their path.”

What do you think about the great power that a few central rabbis have in the Hareidi community?

“In the history of the Jewish people, there was the title of “Rabbi of the Entire Diaspora,” he had control over the entire Diaspora. Is it wrong to place such power in the hands of one man? I don’t think so. I don’t think there is a problem with such concentration of greatness in Torah. But, there are people who exploit this, and that is a problem. The public needs to remove from its midst those who surround the great Rabbis.”

Do you think the decision-making process and management of issues by those who are considered the greatest rabbis is proper and correct?

“I feel that they are missing a little of the message of “Hear the disputes between your brothers and judge fairly between a man and his brother.” (Devarim 1:16) From this verse we learn not to listen to one side’s story without the other party being present. The approach of Rav Yosef Shalom Elyashiv is not to judge people; for example, in my case, as far as I understand, he judged my book, and did not render judgment on me as a person. He has even told his students to honor me in the same way they would have before the ban. But, from my experience, this is not the correct approach. What is a book? A book is an extension of the author. One who insults the book insults the author. In any case, I think that in this case, the rule to not hear one side without the other being present applies, they need to hear the author and his opinions, but the facts are that they have not given me the chance to face those who spoke against me.”

Is there a halachic source for blindly following a rabbi in matters that are not related to Jewish law, such as politics or other matters?

“The Mitnagdim (non-Chassidic Jews) always thought for themselves. If they had a specific question they could not decide, they would come to get advice from a wise and knowledgeable man who had the Torah behind him, but things a person can figure out on his own, it is forbidden to depend on others’ judgment. In his commentary to the Mishna, Rambam describes the great power of the human mind to make decisions, a man must use his own mind, do not denigrate your own intelligence. If you have a doubt about something, go ask someone wiser, after you hear what they say, you do not have to follow their advice like a blind man, you have to digest it and decide if it was good or bad. The Mishna asks, ‘Upon whom should one rely?’ And it answers, ‘On God.’ It does not say ‘On Rav Elyashiv,’ or ‘On Rav Shteinman.’ It is obvious that we talk of individual issues, but in issues concerning the entire community, great Torah scholars are the leaders of the community and guides of all of Israel.”

Great Torah scholars are described in the Hareidi community as all-powerful, as if their entire lives are wrapped in holiness and purity. Do you agree with these descriptions?

“No. I do not agree. This is not the truth. No one is born holy, or dies holy, and never once in their life made a mistake, nothing is ever that simple. I don’t know what is going on, but I never had rabbis like that. Also, when I was a teacher of students, I never encouraged this attitude, because it simply is not true.”

From what, in your opinion, comes the adoration and complete obedience that currently permeates the relationship to the rabbis in the Lithuanian world, which is reminiscent of the way Hasidim act?

“You’d be surprised to hear that Hitler, may his name be erased, is responsible for this. Most of the Jews who survived the Holocaust were from Hasidic areas, and this was their approach. If there is a change in the upbringing of the Lithuanian Jews of today, it is this, that we teach them to be Hasidim of the Lithuanian Rabbis – that is my opinion. I, in any case, was not raised this way. I was raised in the best Lithuanian fashion. Healthy skepticism, respect for wisdom, and having some knowledge of true modesty. But that was my problem –I wrote from that perspective.”

You have written more books, why haven’t you published them?

“I simply do not want anyone to be hurt. But, more will be ready some day, God willing.”

What is your message to those surfing Walla! News?

“Be strong and take heart, and be upright.”

More from the interview:

Who are you, Rav Kaminetsky? Who were your main Rabbis?

What do you love?

“The book ‘The Rebbe” about the Lubavitcher Rebbe, from Professors Shmuel Hylman and Menachem Friedman.”

If you weren’t a Rabbi, what would you be?

“I have no answer to that question.”

If you could make a law, what law would you make?

“I would make Shabbat a day of rest.”

Who is a musician you love?

What do you want them to write on your tombstone?

“I have told my family simply, ‘Rav Nosson Kaminetsky,’ without ‘Gaon.’

What commandment do you love the most?

What Rabbinic title do you hate the most?

“The holy and the pure.”