Leon Weinstein, 101, survived the Warsaw Ghetto. But it is the story of the little girl that he wants to tell

AN INSPIRING TALE OF HEROISM AND DETERMINATION TO START YOUR DAY OFF RIGHT! 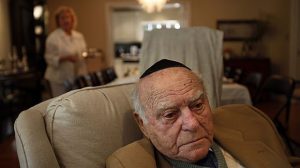 (MCT) She was Jewish, but to live she needed a Christian name.

She could not be Natalie Leya Weinstein, not in wartime Warsaw. Her father wrote her new name on a piece of paper.

“The little one must make it,” Leon Weinstein told his wife. “We got no chance. But the little one, she is special. She must survive.”

He fixed a metal crucifix to a necklace and hung it on their daughter. On the paper, he scrawled another fiction: “I am a war widow, and I have no way of taking care of her. I beg of you good people, please take care of her. In the name of Jesus Christ, he will take care of you for this.”

A cold wind cut at the skin that December morning, so Leon Weinstein bundled Natalie, 18 months old, in heavy pants and a thick wool sweater. He headed for a nearby apartment, the home of a lawyer and his wife. The couple did not have a child. Weinstein hoped they wanted one.

He lay Natalie on their front step. Tears ran down his cheeks. You will make it, he thought. She had blond locks and blue eyes. They will think you are a Gentile, not one of us.

Walking away, he could hear her whimper, but forced himself not to look back until he crossed the street. Then he turned and saw a man step out of the apartment. The man read Weinstein’s note. He puzzled over the baby.

Cradling Natalie in his arms, the man walked half a block to a police station and disappeared inside.

Weinstein was beside himself.

What if the Gestapo took her from the police?

What if they decided that she was a Jew?

Today, at his small Spanish-style home in Mid-City, Los Angeles Weinstein, 101, recalls in agonizing detail what it was like to give up his baby in 1941 amid the Nazi juggernaut. He is frail, but his wit and memory are keen. He remembers well what followed: killing Germans, dodging death, hunting for Natalie.

Holocaust scholars vouch for his account, calling him one of the last living fighters from the Warsaw Ghetto uprising, almost certainly the oldest.

Weinstein was born in the Jewish village of Radzymin, Poland. As a child, he was independent, even stubborn. His family adhered to Orthodox Judaism. He defied his elders and grew into something of a tough. Eyes gleaming, he recalls those who called him a “dirty Jew.”

“They’d meet my fists,” he says. “Then they’d be picking their teeth from the ground.”

By 15, he had run away from home and was living in Warsaw, where he worked as a tailor’s assistant, then for a clothing company. In his 20s, he married Sima. After Hitler invaded Poland in 1939, they were forced to live in Radzymin with other Jews.

Natalie was born the next year. When she was a year old, Weinstein heard a Nazi guard say that German troops would soon send everyone in Radzymin to a death camp.

He prepared to flee and begged his extended family to leave too. They refused, saying Germans would never do such a thing.

But Weinstein had seen Nazi cruelty first-hand. So he slipped away, with his wife and daughter, into the nearby forest. It was far from a haven: anti-Semitic Polish thugs roamed there.

Using forged papers that identified him as a Christian, Weinstein and his family headed to Warsaw. They hoped that the sprawling capital would be a good hiding place. Sima had no papers; if the Nazis caught her, all three might be killed.

A Polish couple promised to hide Sima, but Weinstein and the baby would draw too much attention. They decided to leave Natalie on the lawyer’s doorstep. Weinstein would head for the confines of the Warsaw Ghetto, where fellow Jews would give him shelter.

“This was a place completely unimaginable,” Weinstein says. “A place worse even than the hell that Dante described.”

The ghetto was surrounded by an 11-foot-high brick wall, barbed wire and guards. More than 400,000 Jews had been forced inside the 3.5-square-mile area. By early 1943, an estimated 300,000 of them had been shipped to Treblinka, a death camp in northeast Poland.

Nazis rationed food for those who remained and many died of starvation. Disease killed thousands more. Weinstein feared constantly for Natalie and Sima and was certain he would die.

He joined the ghetto resistance. “If we were going to die,” Weinstein says, “we would do it on our own terms. We would die standing proud, on our feet, making a statement to the world. We would take as many of those bastards as we could kill.”

He helped organize and train resistance fighters. On occasion, using his forged papers, he talked his way out of the ghetto and smuggled weapons back inside.

On April 19, 1943, the first night of Passover, the Nazis began their final push to wipe out the ghetto. When German tanks rolled forward, Jewish fighters appeared at windows, on rooftops, along street corners. They hurled grenades, Molotov cocktails, bricks and rocks. Weinstein ran along rooftops in a fury, strafing Nazis with a machine gun.

The resistance held, but only for a while.

“When could I have been killed?” Weinstein says. “Every five minutes.” He says it again, pausing between each word. “Every …five …minutes.”

One day he was crouched on the second floor of an abandoned building when he heard the footsteps of Nazi troops on the stairs.

It’s over, he told himself.

He looked out a window. A solitary soldier stood guard below.

Weinstein leaped. His steel-toed boots slammed into the soldier’s head. “He fell like a sack of stones,” Weinstein says. “I could see his skull, his blood, brains. For killing a man who hunted me, I felt nothing but good … and I was so excited I felt no pain.

“I was alive at least for another day.”

Weinstein hid in sewers that swarmed with rats and human waste. He eventually found a way out that seemed safe, but was too weak to lift the iron cover.

Was this how he would die?

Weinstein awoke with new energy. He hunched his back against the manhole cover, gathered all of his strength and pushed. It opened.

In the early morning darkness, he hunted for someone who would shelter a fleeing Jew who stank of sewage and looked as though he might collapse and die.

A Warsaw couple he had known before the war took him in.

Weinstein asked after his relatives who had stayed behind in Radzymin. All were dead. He looked for Sima. He learned she was dead too.

By spring 1945, the war was over, and surviving Jews began to leave the country. Weinstein was not among them. He had to find Natalie.

His first stop was the street where he’d left his little girl. It was mostly rubble, but one building stood untouched � the police station.

He walked in. “Do you remember hearing about an abandoned girl who was taken here?”

One officer did. The girl had been taken to a nearby convent.

The nuns there remembered, too. The baby was among several they tried to shelter. Disease claimed some, but the baby named Natalie survived. When the fighting drew near, she was sent to a cloister in the countryside.

Over bombed-out roads, pedaling hard on his bicycle, Weinstein made his way there. But Natalie was gone, sent to another group of nuns. On he went, to convent after convent, sometimes sleeping in fields.

The story was the same. Natalie had been there, but nobody knew where she was now. Nobody knew if she was alive.

After six months, Weinstein returned to the city, exhausted.

Then, against all hope, he decided to visit a convent near the ghetto. He walked past a statue of the Virgin Mary, then into a hall where dozens of pale, thin orphans stood.

As he drew away, frustrated, a nun walked past, carrying a bony, blond girl, who looked about 4. He looked into the child’s eyes. They were blue.

This, he said, was Natalie.

“If she is,” Weinstein said, “then she has a little brown birthmark, the size of a pencil eraser, just near her right hip.”

The nun lifted the girl’s dirty gray shirt and they looked.

He had found Natalie.

Weinstein and Natalie moved to France.

In time, he married Sophie, another Holocaust survivor and they had a son, Michael.

In 1952, the family took a ship to New York, then a train to L.A., where Weinstein became a successful clothing manufacturer. In 1993, Michael died in a car accident. Twelve years later, Sophie died of heart disease.

Weinstein remains full of life. He recites the Torah at Congregation Atzei Chaim, the Beverly Grove synagogue he has attended for seven decades.

He reads three newspapers and sips at least one glass of Chivas Regal, on the rocks, every day.

He rarely goes more than two waking hours without telephoning the woman who fusses over him, who tends to his every need. She is a psychologist known by her married name: Natalie Gold Lumer.

Every Friday night, father and daughter share a Sabbath meal. They gather with family and friends, light candles, hold hands, tell stories and offer lengthy prayers of thanks.

“It was terrible, what I went through,” Weinstein said at a dinner not long ago. “But it was worth what I came away with: my beautiful daughter.”

Natalie looked at him, shaking her head. There was a long silence.

“To have a father with such courage,” she said, finally. “Well, I owe everything to him…I owe him my life.”

← Azerbaijan – It’s an All-Jewish Town, But No, It’s Not in Israel
Who Did a Mitzvoh →