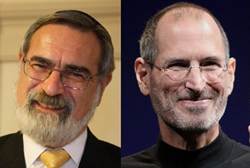 Recently Rabbi Jonathan Sacks blasted consumerism and the dangers it posed [1]. Steve Jobs was the main target by having the world think about “i,i,i,i,i,i,” with the iPhone, iPad, etc.

Another Rabbi in the past have done the same, one of which said that we have turned into cavemen, such as “I this, i that, i turkey.” Even the word “we” today has 2 I’s (Wii)!

The following must be noted: