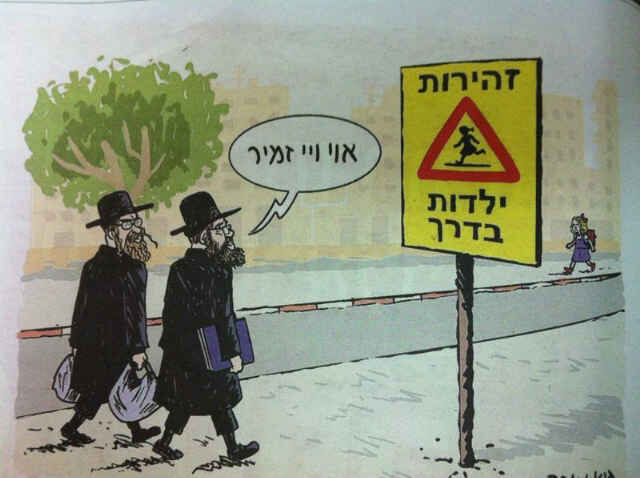 JERUSALEM (Reuters) – Prime Minister Benjamin Netanyahu stepped up pledges to curb Jewish zealotry in Israel on Sunday after an 8-year-old girl complained of being menaced by ultra-Orthodox men who deemed her dress immodest.

While his conservative government insists such incidents are fringe phenomena in the mostly secular country, Netanyahu’s repeated announcements on the matter reflected concern about widening religious and political schisms.

“In a Western, liberal democracy, the public realm is open and safe for all, men and women both, and neither harassment nor discrimination have any place there,” he told his cabinet in broadcast remarks.

Netanyahu said he had ordered law enforcement authorities to crack down on “whoever spits, whoever lifts a hand (in violence), whoever harasses” and to remove street signs segregating men from women in some ultra-Orthodox districts.

The statement appeared to have been prompted by an expose on Israel’s top-rated weekend news about intra-Jewish friction in Beit Shemesh, a town of about 87,000 people near Jerusalem.

Naama Margolese, 8, told Channel Two television she was terrified of walking to her moderate Orthodox school because of passersby who want her “to dress like a Haredi” – the Hebrew term for the ascetic, black-coated Jews who are in “awe” of God.

“I’m afraid I might get hurt or something,” the girl said.

Margolese’s mother Hadassa, an American immigrant who wore a headscarf and skirt in deference to religious Jewish tradition, said the sidewalk abuse could include spitting, curses like “whores” and “bastards” and calls to “clear out of here.”

“If that’s what happens now, and they (authorities) don’t do anything, what will happen in another few years?” she told Israel’s Army Radio on Sunday. “This is a terrorist group.”

Returning to Beit Shemesh on Sunday, a Channel Two crew was mobbed by ultra-Orthodox Jews who stoned their car, wounded a reporter and stole equipment, police said. The crew was rescued by police, who said they were questioning suspected assailants.

Separately, police said they had arrested a Beit Shemesh man for spitting at a woman, and that he could face assault charges.

In the report broadcast on Friday, Channel Two showed a Beit Shemesh street sign instructing women to keep to one side, away from a synagogue. A few ultra-Orthodox men who agreed to be interviewed sought to justify their forcible occlusion of women.

Israeli media have debated the impact of religious gender segregation on public transport and the conscript army, where some pious troops prefer to shun female instructors and singers.

The ultra-Orthodox make up only about 10 percent of Israel’s population of 7.7 million. But their high birthrates and bloc voting patterns have helped them secure welfare benefits and wider influence. One of Netanyahu’s biggest partners in the coalition government, Shas, is a party run by rabbis.

According to Channel Two, its Beit Shemesh story has generated momentum for a demonstration against ultra-Orthodox coercion in the town, scheduled for Tuesday.

Moshe Abutbol, the Shas mayor of Beit Shemesh put the number of townspeople involved in the abuse at between 20 and 50.

Emulating Israeli commandos who disguise themselves as Arabs for missions in Palestinian areas, the police have officers who work undercover among the ultra-Orthodox. Israeli television showed them raiding a religious protest in Jerusalem on December 17.

Netanyahu has also condemned radical Jews behind a spree of vandalism against Palestinian property and Israeli garrisons in the occupied West Bank, attacks designed to bog down government moves to raze settlements built without a permit.

“Beit Shemesh shocked Netanyahu not because of new facts but because of old facts that were recounted by a lovely little blond-haired girl with blue eyes,” said Nahum Barnea, senior commentator for the biggest-selling newspaper Yedioth Ahronoth.

← What did Avraham Avinu wear?
Chanuka Miracle: Discovery near holy site in Israel provides a link to ancient rituals →