These are two pieces that ran a week apart in the New York Herald (Tribune) in March of 1841. They describe Purim before, and after. The quality of them is not the greatest, so I also typed them below: 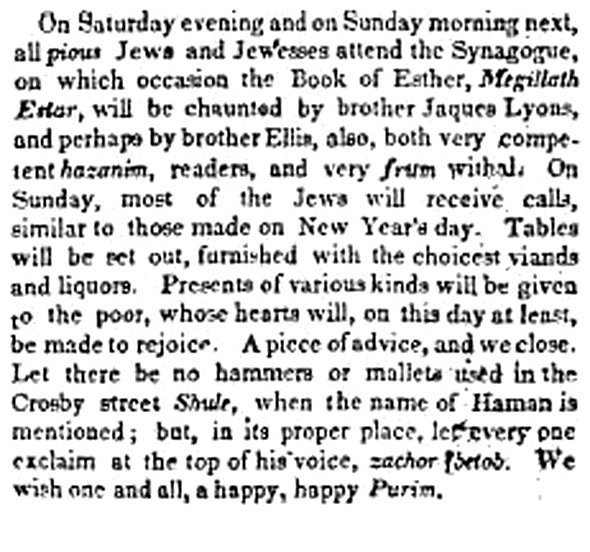 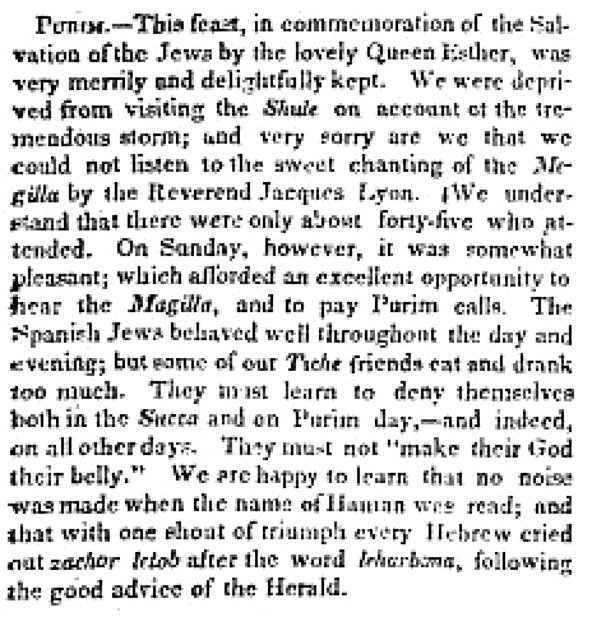 March 3, 1841: On Saturday evening and on Sunday morning next, all pious Jews and Jewesses attend the Synagogue, on which occation the Book of Esther, Megillath Estar, will be chaunted by brother Jaques Lyons, and perhaps by brother Ellis, also, both very competent hazanim, readers, and very frum withal. On Sunday, most of the Jews will receive calls, similar to those made on New Year’s day. Tables will be set out, furnished with the choicest viands and liquors. Presents of various kinds will be given to the poor, whose hearts will, on this day at least, be made to rejoice. A piece of advice, and we close. Let there be no hammers or mallets used in the Crosby street , when the name of Haman is mentioned; but, in its proper place, let every one exclaim at the top of his voice, zachor letob. We wish one and all, a happy, happy Purim.
March 9, 1841: Purim – This feast, in commemoration of the Salvation of the Jews by the lovely Queen Esther, was very merrily and delightfully kept. We were deprived from visiting the Shule on account of the tremendous storm; and very sorry we are that we could not listed to the sweet chanting of the Megilla by the Reverend Jacques Lyons. We understand that there were only about forty-five who attended. On Sunday, however, it was somewhat pleasant; which afforded an excellent opportunity to hear the Magilla, and to pay Purim calls. The Spanish Jews behaved well throughout the day and evening; but some of our Tiche friends eat and drank too much. They must learn to deny themselves both in the Succa and on Purim day,- and indeed, on all other holy days. They must not “make their God their belly.” We are happy to learn that no noise was made when the name of Haman was read; and also that with one shout of triumph every Hebrew cried out zachor letob after the word leharbona, following the good advice of the Herald.

Sure wish I knew who wrote these. First published use of “frum?” Maybe.
Jacques Lyons (b. 1813) was the hazzan-minister of Shearith Israel (“the Crosby street Shule) from 1839-1877.

← Chasidic Superman!
Ramchal – Beards and Beardlessness in Italian Jewish History – is Rabbi Reisman Correct That “All Great Tzaddikim” Had a Full Beard? →