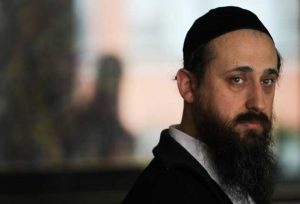 Pawel Bromson, a former Polish neo-Nazi, is pictured at Chabad of Westmount on Monday, March 24, 2012. Bromson became a Hasidic Jew in his native Poland. He discovered he had Jewish grandparents when he was in his 20s after he had vandalized Auschwitz and committed other acts related to being a neo-Nazi. Photograph by: John Kenney, THE GAZETTE

BY KATHERINE WILTON, THE GAZETTE

MONTREAL – Pawel Bromson grew up in Poland where he and his skinhead friends sometimes roamed the streets of Warsaw, terrorizing Jewish, Arab and black children.

On one occasion, he and his mates boarded a train to Auschwitz and vandalized the former concentration camp. They hurled insults at staff members, telling them “the genocide should have been bigger.”

Bromson and his peers were suspicious of outsiders and disliked Jews, whom they blamed for Poland’s economic troubles under the Communist regime.

But Bromson’s life changed forever 14 years ago after his young wife visited a genealogical institute in Poland. His wife suspected she had Jewish roots and while sifting through papers, she noticed the names of Bromson’s maternal grandparents on a register of Warsaw Jews. When a stunned Bromson confronted his parents with the news, they acknowledged their Jewish past.

“I thought my life was finished; it was a catastrophe,” he said of the news.

Like many Jewish families who had survived the Holocaust in Poland, Bromson’s parents hid their religion from their children in order to protect them from persecution.

Over time, Bromson accepted the truth about his Jewish identity and began to explore the religion. He went to synagogue and spoke at length with a senior rabbi about Judaism.

He eventually took the major step of converting to Judaism and became a Hasidic Jew.

Bromson, 36, will speak about his unlikely journey from neo-Nazi skinhead to Hasidic Jew Tuesday night at a fundraising event at the Chabad of Westmount, an educational centre that teaches people about Judaism.

Bromson buried his head in shame Monday afternoon when he was asked about his neo-Nazi past. “Please, don’t ask me,” he said in halting English. “I try to forget, but I can’t.”

Bromson said the Poland that he grew up in has changed dramatically over the past 20 years. Over the past few years, some Jews in Warsaw have rediscovered their roots and Bromson said there are now about 600 Jewish families in the city.

Before 1939, there were three million Jews in Poland. About 90 per cent of them died in the concentration camps during World War 11.

Although he said he feels comfortable walking around Warsaw, his long beard and black hat sometimes draw stares and comments from his fellow Poles. About two months ago, he bumped into an old friend from his youth. Bromson said the man’s children were baffled about why their father was talking to a Hasidic Jew. “This guy is your friend?” they asked.

Deborah Shanowitz, program director at the Chabad of Westmount, said they brought Bromson to Montreal because he has a very unusual story.

“He was a neo-Nazi who hated Jews and all minorities… after embarking on a path of finding out what it is to be Jewish, he decided to go back and be like his great-grandfather,” she said.

The fundraising event is part of the Chabad’s lecture series. Tickets are $180 per couple. Bromson’s speech will be translated by a Polish interpreter.

Article courtesy of the Montreal Gazzette.