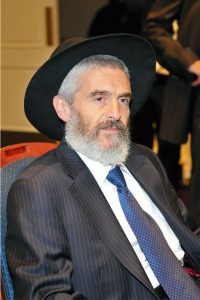 We all know and love Rabbi Dr. Akiva Tatz. This past Shavuos Rabbi Tatz spoke at SSCM (Shomrai Shabbos Chevrah Mishnayos) on the second day of Shavuos, this past Monday. Very inspirational.

He’s surprisingly short – about 5’4″ in height! I know, EVERY Gadol is 10 Amos in height based on Ruachniyus (sic).

Hopefully by the end of the speech we will learn how to speak English properly. 😛

Ten commandments: The real ones were square. So why curved? Answer: Because it’s a childlike combination of commandments and the (shape of a) heart. Chazak V’Yaametz Libecha.

There are 720 permutations to the word Bereishis. Bereishis has 6 letters, so 6!=720. Bereishis, Bara Shis, etc.

The Vilna Gaon was able to derive all 613 commandments from the word Bereishis, whether it was through a literal spacing of words or using mixtures of the letters as acronyms.

One person asked him, “where is Pidyon Haben in Bereshit?”

The ten commandments are special because the other 603 are derived from them.

The first set of tablets and second correspond with each other in that the first set are Gd related and the second are human-being related. So what do we make of commandments 5 and 10, Honor your father and mother and “Do not covet?”

Hebrew is the only language where the word Hoda’a, thankfulness, can also mean acknowledging.

Honor, Kavod had to do with acknowledging ones root. A human being has to acknowledge his/her root point of origin, his parents. With coveting, you are looking at something that belongs to someone else, that object’s root, and you are claiming it for yourself, which is of a different root(, which implies worshiping a different Gd -RH).

Another story of a head Ashkenazi Rabbi and question of parents coveting daughter’s kidney for her younger brother. In the end they promised her their apartment in case she became any less marriagable.

The tablets: something else amazing: when you write something there’s 2 elements. Torah was black fire on white fire. The tablets though have the commandments bored in, engraved. That showed that there was a unity between the tablets and the text.

The letter Alef is amazing, speaking about mirror images. The Alef is 2 yuds and a Vav which amount to 26, which is YKVK. The Vav allows the Yud to reflect itself. The Alef can also be 32 as Vav is double based on the full spelling. Also important. Lev is 32. The 32 first Pesukim are the foundation of creation.

Hebrew is the only language in the world where the word for Word, Davar is both a word and an object. Hashem created by speaking it. That’s why it’s Lashon Kodesh, since the words merely agree on the object.

Emunah is faithfulness, not faith. If you have faith, Gd is not absolute.

You can’t prove Gd, but you can show evidence.

Story 1: A girl who fell into a boar, boy picked her up but made her swear to marry him. Used Well and weasel as witnesses. Girl stayed true, boy forgot about it. Remarried and had 2 sons that died, one from well and one from weasel. Girl went crazy so that she could only marry him.

Addictions – if you have a strict mindset to lose weight from start to finish, and you eat a small piece of cake, you then feel like an utter failure. Same with quitting smoking

Story 2: As a doctor, he is aware of a disease (Bergers disease) where nicotine constricts blood vessels until limbs need to come off. As a junior intern he encountered a person who had this disease, had to have his leg cut off from the trunk. 2nd year, both legs off and he could have saved his arms. 3rd year, he only had 1 arm left, 4th year he had to be propped up with a device to smoke a cigarette. He could have saved his whole body! Defies logic.

Rambam was asked by a neo-Greek about birth after death. Prove it. Rambam proved it through natural birth: the direct opposite of what should happen. If a fetus had any qualities of a newborn and vice versa it would die. And in fact the first two minutes of birth it looks like both the baby and mother are dying. The baby is turning blue, then purple, and then the ductus arteriosis closes up, first breaths. Life after certain death.

A baby in the womb would die in the habitat of the outside and vice versa.

Religion: what’s amazing is that an Oxford  professor and a scientist can both talk about religion with disdain, neither knowing much about it. For religion, you need a religious specialist. Can you imagine a Rabbi tell an Astrophysicist, “I don’t know much about Astrophysics, but I think I can sum it up in a few words: ‘Twinkle Twinkle Little Star?'” Can you imagine going to a physics conference and telling this to physicists this? You would look foolish.  Treat others as you would want to be treated.

He remarked how hot it was and then told a 3rd story. Nobody remembers it.

Speech 3: Mincha/Maariv – Laughter and the Torah

What is Laughter? Is laughter a good thing? Al Pi Halacha it’s not appropriate to be overly happy, as there’s just too much pain in this world.

Laughter is generated where something has an event that goes completely the opposite of what should happen. For example, a well-dressed executive slipping on a banana peel. You can’t not elicit a smile.

Yitzchak was the epitome of laughter. two old people trying to have children for years and then being told that they will have a child. Cause of laughter. Then he is ready to be married and Avraham now is ordered to Shecht his son. Hashem tells Avraham, “I don’t want you to kill your son. Now slaughter him.” That caused him to laugh in the process. By the way, laughter is one of the requirements for prophecy.

This theme has been throughout Jewish History. Haman and Jews, Gallows. Uziel/Eliyahu/Charvona says to Haman, “suits you!”

Laughter is now where the Jews are being laughed at but we will have the last laugh.

Imagine that there was a Kosher movie. Last one was in 1950. Was a very good movie. You are watching images on a screen. You are a seeker for the truth. What you saw was an illusion. In Kabbala they talk about this, that this world is far removed from the source. When we go to the next world we will recognize everything based on imagery. By the way, the world is an illusion.

There is no word in the Torah for “doubt” or “certainty.” Safek and Vadai are words of Rabbinic origin. The word doubt comes from uncertainty from the Etz HaDaas. Hashem didn’t create anything doubtfully.

Rav Dessler. The word Nature, Teva, doesn’t appear in the Torah. In Torah you have Matbeah (coin) and Toveh (to drown). Reason? Ain Od Milvado.

No words for adventure, romance, chivalry. Adventure is doing something that is life threatening. Who normally would go bungee jumping by tying a piece of rope to a leg and jumping off a bridge? Hebrew word: Meh-shu-gah. The Torah gives enough of a thrill.

When we leave this world we will notice that everything was an illusion.

Rambam story: Rambam talks about Moshiach and what will happen. He wrote this before all this happened. Mosque built on Har Habayit. Muslims will say to us that both will compare sacrifices and whoever’s gets consumed, the other religion will have to adopt. The Jews will accept. Hashem will consume the Muslims’ sacrifice and tell the Jews about the deal. The Jews will say “no way! Shema Yisrael!” Lots of bloodshed, some Jews will flee to the desert, and Moshiach will come after the Jews are in the desert for 40 days. He will wake up the Avos in Chevron, etc. and we will have the last laugh.