Prof. Robert Wistrich of the Hebrew University tries to explain why Queen Elizabeth has not visited Israel in the past 60 years. 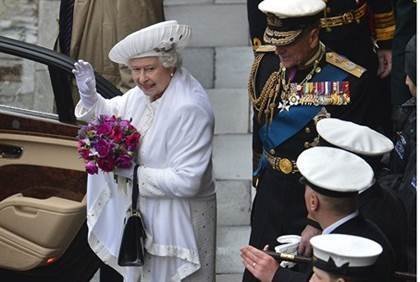 Professor Robert Wistrich of the Hebrew University in Jerusalem, world renowned expert on anti-Semitism, spoke to Arutz Sheva on Monday about the fact that Britain’s Queen Elizabeth II, who is marking her 60th year as Queen, has visited over 130 countries over the last 60 years but has not once visited Israel.

Prof. Wistrich noted that no one from Buckingham Palace has ever come for a visit in Israel, with two exceptions: one was when the Queen’s husband, Prince Philip, came to Israel for a ceremony in which his mother was honored as a Righteous Gentile. The second was when Prince Charles attended the funeral of Prime Minister Yitzchak Rabin in 1995.

In both these cases, Wistrich noted, the palace was careful to emphasize at every opportunity that the visits were private ones and did not represent the palace.

The reason for this, in Prof. Wistrich’s opinion, is an unwarranted fear that a visit by the Queen in Israel would hurt the British Empire’s business in Arab countries.

As for the possibility that the Queen does not wish to visit Israel because it chose to reject the British Mandate and establish an independent state in 1948, Wistrich said that in his opinion the Queen’s refusal to visit Israel definitely contains an element of de-legitimization and there is no doubt that if she would choose to visit Israel, it would be seen as a clearly symbolic act.

He emphasized, however, the Queen’s positive attitude to the Jewish people.

“She displays no anti-Semitism or prejudice,” said Wistrich, noting that the British palace has a long-standing tradition that every son who is born there undergoes a circumcision by a mohel.

Recently it was reported that Prince Charles is likely to visit Israel within the next three years.

The Prince may be interested in visiting the Jewish state due to his interest in the environment and Israel’s advancements in technology and the green sector.