Is one allowed to interlock fingers between hands or not?

According to the Sepharadi Daily Halacha on August 16, 2011:

The Zohar Ha’kadosh, in Vayikra (p. 24), writes that when a harsh judgment is issued against a person, Heaven forbid, his fingers will unwittingly begin moving, and the fingers of his two hands will become interlocked. As interlocking hands is a sign of harsh judgment, it is improper for a person to intentionally hold his hands in this position. The Ben Ish Hai (Rav Yosef Haim of Baghdad, 1833-1909), in Parashat Pinhas (18), cites this Halacha in the name of the Arizal (Rav Yishak Luria of Safed, 1534-1572). This is mentioned in other sources, as well, including the Sefer Ha’hasidim (by Rabbenu Yehuda Ha’hasid, Germany, d. 1217) and the Kaf Ha’haim (Rav Yaakob Haim Sofer, Baghdad-Israel, 1870-1939). Thus, while it is permissible to place one hand on top of the other, one should not interlock the fingers of the two hands.

The Ben Ish Hai goes even further, writing that one should never place his hands behind his back, and should rather keep them in front of him at all times. Indeed, there are different kinds of spiritual powers associated with the positioning of one’s hands and fingers, as Rabbenu Bahya discusses at length.

The Sefer Hazechira mentions that those who are accustomed to interlocking their fingers run the risk of experiencing extreme anxiety, Heaven forbid.

There are many warnings of this kind that we hear as children, and many people are unable to distinguish between those that stem from folklore and superstition, and those which have a clear basis in Jewish tradition. When it comes to interlocking fingers, this is a well-documented warning that originates already from the Zohar and the teachings of the Arizal.

Ashkenazim aren’t in agreement with that

However, many Ashkenazim don’t believe in that. In fact, Chadrei Charadim (http://www.bhol.co.il/forums/topic.asp?topic_id=2341284&forum_id=771) recently showed a picture of Rabbi Shalom Elyashiv interlocking his fingers! This Maaseh is groundbreaking considering who is doing this! Rabbi Elyashiv, for those who don’t know, has been studying Torah non-stop for over 60 years now. 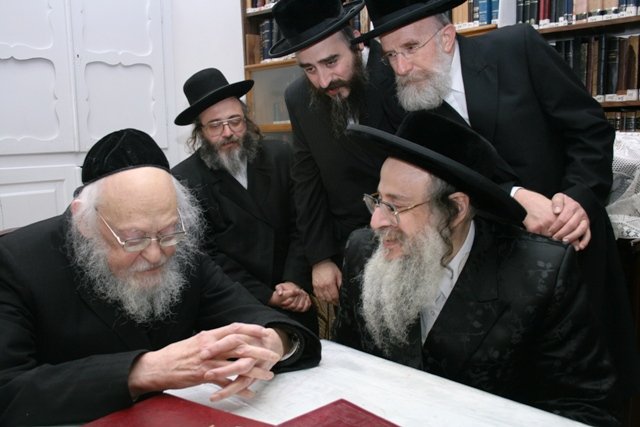 So, is it nonsense? You be the judge.

← Is Yogurtys Kosher?
Charedi Kosher Meshugass – Bans of the Day →