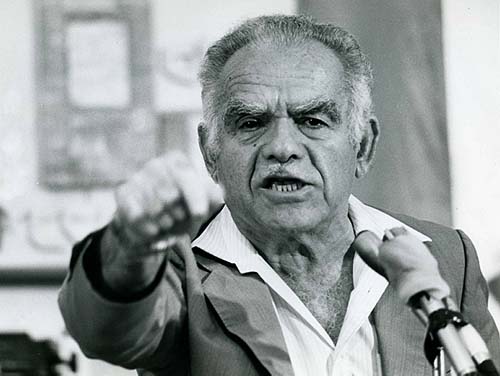 Yitzhak Shamir (Jeziernicky) was born in Rozhinoy, Belarus, October 15, 1915. He studied at a Hebrew High School in Białystok, Poland. As a youth he joined Beitar, the Revisionist Zionist youth movement. He studied at the law faculty of Warsaw University, but left to make aliyah in 1935. In 1944 he married Shulamit Shamir (1923–2011). They had two children, Yair and Gilada.

In 1941 Shamir was imprisoned by the British. After Avraham Stern was killed by the British in 1942, Shamir escaped from a detention camp and became one of the three leaders of the group in 1943. In 1944, he was exiled and interned in Africa by British Mandatory authorities. He was freed, along with the other detainees, after the Israeli Declaration of Independence in 1948.

In 1955, Shamir joined the Mossad, serving until 1965. He directed the assassinations of former Nazi rocket scientists working on the Egyptian missile program.

Shamir served several terms as prime minister throughout the 1980s. He maintained a hard political line, which strained his relations with the U.S. Shamir opposed the Madrid peace talks, and then President George H.W. Bush retaliated by holding back approval for loan guarantees to help absorb immigrants to Israel from the former Soviet Union. Shamir gave in and in October 1991 participated in the Madrid talks. After the talks, his government collapsed and in 1992 he was defeated by Yitzhak Rabin.

← Top Ten Signs You Are a Very Patriotic Hebrew
Viral Photo of the Day: Orthodox Man Learning Talmud on the Subway →