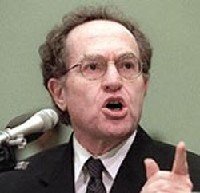 A little while back I was at a Simcha in Toronto where a bearded, black-hat fellow named Yekutiel Dershowitz was present. We got into a discussion and as it turned out Alan was directly related to him. He told me that while Alan went to Torah Vodaas and then went off the Derech, even in Yeshiva he was known to be a wild, hot-tempered boy.

That fits in nicely with his personality which was manifested by his debate with R’ Meir Kahane in the 1980’s as well as his overall tenacity on rejecting traditional Judaism, on which he was raised.

← Letters in the Torah – Ben Asher Version – Which One is Right?
Before The Deluge: Jews Of The Mediterranean Islands (Part IV) – Malta →