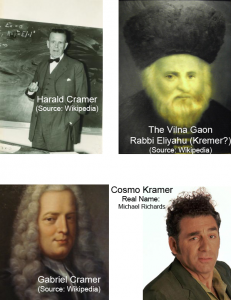 In the Yeshiva world some people like to attribute the Vilna Gaon’s mathematical expertise (from his publication of a Trigonometry book Ayil Meshulash) and giving him credit to Cramer’s Theorem (his grandfather’s last name was Kremer, hence the derivative). I would like to debunk the bunk.

Firstly, while the Vilna Gaon wrote amendations and corrections on the Talmud based on Mathemics and likely was well-versed, the Ayil Meshulash book was a basic “intro” book to Trigonometry. Most high-school textbooks today cover much more (thanks, Reb Micha Berger) – see here.

Secondly, Cramer’s theorem/rule has two authors. Both were Gentiles, forget Rabbis with a secular name corresponding with Eliyahu.

This of course is not to say that the Vilna Gaon was not well-rounded in the Maths and Sciences. This is more of a matter of getting the facts straight.

← Leading Rabbi Yosef Shalom Elyashiv Passes Away at 102 – Baruch Dayan HaEmes
Before The Deluge: Jews Of The Mediterranean Islands (Part V) – Rhodes, Cos, Lesbos and Lemnos →