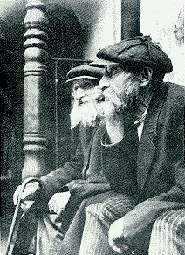 Bernard Wasserstein’s On the Eve: The Jews of Europe Before the Second World War tells the story of interwar European Jewry, the rapid decline from tradition following World War I. In the process, Wasserstein describes the many kinds of Jews of the period. Here are two types (pp. 24-26):

Jews often preached unity but no less often they meant different things by it. Though the European Jews shared many social and cul¬tural characteristics, they were riven by deep divisions. Historically, the most fundamental was between Ashkenazim (Jews of German origin) and Sephardim (descendants of Jews expelled from Spain and Portugal at the end of the fifteenth century)…

Ashkenazim, who constituted at least 90 percent of the Jews of Europe, were themselves deeply divided: between Litvaks and Galit-syaner, between Hasidim and misnagdim, between western (particu¬larly German) Jews and Ostjuden(emigrants from eastern Europe), as well as among orthodox, liberal/reform, and secularized Jews, not to mention crosscutting political differences.

The Litvak and Galitsyaner were both types of Ostjude but each had its own stereotype, which was applied to inhabitants of the areas in question as well as to emigrants from them and even to their descendants. The Litvak originated in Lite, an area broader than interwar Lithuania, stretching as far east as Vitebsk and as far south as Minsk and Bialystok. The Litvak was “smart, analytical, learned, worldly, skeptical, proud, stubborn, dynamic, and energetic.” “He was also dry, rational, and unemotional. By contrast, the Galitsyaner, a Jew from the southern Polish province of Galicia, was warmhearted, sly, witty, sharp, stingy, ibergeshpitst (crafty), and something of a trickster. He had a “peculiar mix of shrewdness and heartiness.” “To be called a . . . Galitzianer was for long not much of a compliment. . . It denoted folksy backwardness and at times also a petty mercantile mentality and moral shiftiness.”‘ The two types spoke different kinds of Yiddish: the Lithuanian version was regarded as more cultivated; Polish/Galician Yiddish was homespun and earthy. The split was also partly culinary. The Litvaks prepared their gefilte fish savory rather than sweet and their farfl(egg noodle dough cooked in broth) as small pellets rather than rolled into flat sheets that were then sliced, as was the custom among Galitsyaners.

The division between Litvak and Galitsyaner followed, in large measure, the lines of division between Hasidism and its enemies, the misnagdim. The greatest opponent of Hasidism in its early phase had been Eliyahu ben Shlomo-Zalman (1720-97), the gaon (a high rabbinic title) of Vilna. But Hasidism had some adherents in Lite, in particular the followers of Shneur Zalman of Lyady (1745-1813), founder of the Chabad movement, better known, from the small-town location of the rabbinical court of the second rebbe of the dynasty, as Lubavitcher Hasidim. Even in Galicia, however, the overenthusiastic, dancing, singing Hasidim were often viewed with a raised eyebrow. The writer S. Y. Agnon recalled that in his home shtetl of Buczacz the Hasidic prayer house was called the laytsim shlikhel (the little synagogue of clowns).