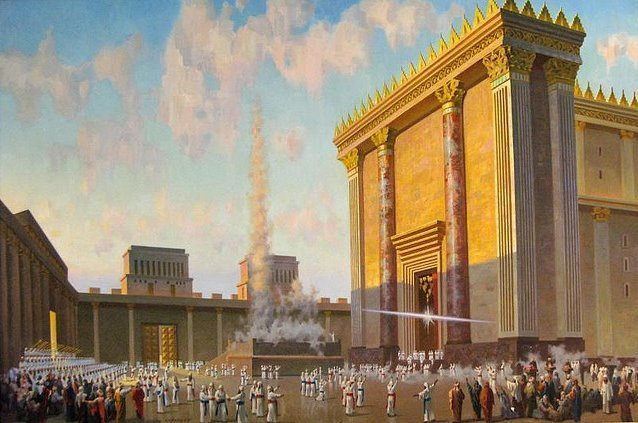 Tisha B’Av is upon us, and with it, a sad reminder that our Sanctuary, the Beis Hamikdash, has been destroyed for the last 2,000 years and has not returned to us in our times yet, being that Moshiach ben David has not arrived yet for us to accept (or rather, he might be here in our generation, but we’re not ready to accept him so fast).

Living in Chutz La’Aretz it’s easier to feel that we are missing out on a lot when our Bais Hamikdash is not built, and in the place of it a very ornate Mosque of Omar stands.

However, there are those in Jerusalem that seem to have a very difficult time relating. Yishai Fleisher, the beloved radio-show personality in Jerusalem, comments that there is a merry atmosphere on Tisha B’Av as the situation has drastically changed. He writes:

It makes sense that some level of happiness is in the air, because after all, we are bewailing the destruction of Jerusalem in a big, beautiful and built Jerusalem. This contrast is highlighted in the Jewish liturgy on the 9th of Av when we say the “Nachem” prayer referring to mournful, destroyed and desolate Jerusalem. However, we say that prayer in one of the hundreds of beautiful Synagogues in the city, or at the courtyard of Jerusalem’s city hall, or at the Western Wall with thousands of our fellow Jewish Israeli citizens who have travelled from other thriving Israeli cities on the paved roads of the Jewish state to pray for the future of Jerusalem.

Indeed, a major change has taken place in Jewish life, and while we keep the same rites as we have kept for 2000 years, our reality is vastly different. To understand the change, here is a parable: Two women are in a room and both are single. One’s husband has just died, while the other is engaged to be married – both are indeed single, but they are in totally different states of mind.

Indeed, ever since Jerusalem was re-captured during the six-day war, there was sentiment in the air that certain prayers on Tisha B’Av were passe and needed to be revised. Rabbi Abraham Rosenfeld, a prominent Zionist Rabbi at the time, composed his own revision of that prayer that was deemed controversial even by fellow Zionist Rabbis, such as Rabbi Yushe Ber Soloveitchik, Rav Kook, and others. Needless to say, while that prayer was printed by Soncino Press, it eventually was ruled that his prayer had no weight since conquering it wasn’t enough.

So, what’s going on? I think that in Jerusalem, lots of Jews live in their own little bubble. They have Jerusalem, and living outside of there is almost like a sin. They have their Egged buses, their Kenyons (malls, after the term Kinyan, acquiring),  Anglo tourist traps like Ben Yehuda street, Battei Knesiot, Makolets and Shuks, government-funded Yeshivot, and Battei Cholim (hospitals). Everything is there, and everyone is blissfully happy, la di dah.

However, as an outsider, I find it very interesting that nobody there seems to think beyond their own Dalet Amos (their 4-6 foot perimeter). When there are constant lobbies and real threats to destroy the Jewish State by Iran and other Arab countries, terrorist organizations like Hamas and Al Quaeda, when there are suicide bombings even outside of Israel, such as in Bulgaria, when there is palpable anti-semitism on university campuses, such as a Canadian-legislated Israeli Apartheid Week during the first week of March, when the IOC (International Olympic Committee) this year refused to take a moment of silence for the Israeli gymnasts murdered in Munich in 1972. Oh yeah, what about the Holocaust and how very little has changed since then? Also, what about the sicknesses that have befallen people, young and old, and little babies that don’t live very long in this world (something I can relate to on a very personal level)? These things should tell us that there is still A LOT to cry and mourn for.

I can tell you from personal history that I merited experiencing my first full fast on Tisha B’Av in Jerusalem’s Kiryat Moshe neighborhood when I was 11 years old. Perhaps I was visiting and didn’t live there, but I still felt a sadness that we didn’t have our Beis Hamikdash. Perhaps if I lived there every year I would have felt differently?

I recently heard the following from either Rabbi Yehuda Oppenheimer or Rabbi  C.D. Kulik in Toronto while they were delivering their Tisha B’Av speeches (one of the two): He was once at a Shivah house where a young woman with 6-8 kids unfortunately passed away. When he was there he heard the older children talk about how their mother did this, did that, was a Baalas Chesed, etc. During the Shivah he saw that a 2-year old child came into the room, bouncing and bubbly, having just eaten chocolate-vanilla ice-cream, some of which was on his shirt and pants. It was explained that he was the youngest child. Others that weren’t so sensitive innocently remarked that he had it easiest since he was so young and wouldn’t remember the pain. However, those that felt empathy would have pitied him the most as, in reality, he had no connection with his mother while the others had a connection with their mother and thus merited feeling the pain of such a loss.

Perhaps this is the case here. The ice-cream for the Jerusalem residents may be all of the amenities described above. The ice-cream also may be that some of the prophecies have already been fulfilled, such as old men and women sitting in the streets of Jerusalem, the ingathering of exiles with Ethiopian and Chinese Jews, etc. They are so far removed that they cannot feel the loss of the Beis Hamikdash, the mother. Those that feel merriment on Tisha B’Av and not sadness are to be pitied the most as they “feel it” the least and, while living in the very land, are ironically somehow so disconnected with the Mother, i.e. what’s better out there.

Postscript: Speaking with friends and relatives living in Jerusalem very recently, I found that the atmosphere for them was also a very sad one. I guess the articles and reports I got were a very one-sided view. Judaism has many faces and that is very much seen in Jerusalem as well as all of Israel.

← Q & A: A SIMCHA DURING SEFIRA
Before The Deluge: Jews Of The Mediterranean Islands (Part VII) – Delos, Sardinia, Baleric Islands →