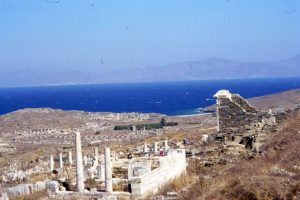 On the islands of the Cyclades [Translator’s note: south of the Greek mainland], north of Naxos, an island that played an important role in ancient times, there was a Jewish community in the second century BCE which – as shown in inscriptions – while heavily influenced by Greek culture, was genuinely loyal to Jewish law and Jewish teaching.

A French excavation from the year 1912 exposed the remains of a synagogue from the second century BCE. The ruins were found not far from the sea in the northeastern part of the island. The synagogue was expanded in the following century. Following a certain trouble the Jews experienced in the year 46 BCE, the Romans granted an official, published, unrestricted grant of religious freedom. [This was the year Julius Caesar seized total control of the Roman Empire from his opponents. In his own way, Caesar was as renowned for tolerance as was Alexander the Great.]

In the following centuries all traces of Jews on Delos disappeared. Today the island is abandoned. 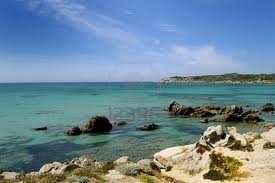 In Sulcis, traces of a Jewish settlement from Roman imperial times have been found. In the capital city of Cagliari, a synagogue from the 6th century has been discovered. From the time when the Kingdom of Aragon took control in 1325, Sardinia received a steady flow of refugees from Barcelona and the Balearic Islands. Alghero also had a growing Jewish population.

The professional structure of Jews on Sardinia was similar to that on Sicily where, next to trade, craftsmanship was well represented. There were Jewish locksmiths, smiths, silver workers, and weavers, whose lively labor even brought forth an anti-noise movement, when King Ferdinand banned “noisy commerce” on Christian holidays. 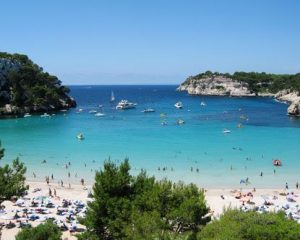 One hears of the conversion of Jews in Mahon in the 5th century. During the period of Arab control, the Jews lived in a fortified section of Palma. In the middle of the 12th century, after the rebellion by the Almohadens, there was a large wave of Jewish refugees from the Spanish mainland. Under Aragonese control in the following century, the Balearics received more refugees from southern France, North Africa, Egypt, and other lands of the Mediterranean. The islands achieved a growing significance for trade, thanks to their favorable position between Spain and Sicily.

Material gains corresponded to a growth in all areas of cultural life. Mallorca was the homeland of Jewish mapmakers. Abraham and Joseph Cresques of Mallorca created the conditions for the groundbreaking discoveries of their colleagues through their “portolanos.”

The Balearics were an important meeting point for well-known Jews. Leo Mosconi came from the Balkans; he died in Palma and left behind an important library. Simon ben Zemach Duran came from Palma, and fled to Algeria in 1391 after an outbreak of religious persecution, where he became a noted teacher, religious philosopher, and Kabbalist. His name was mentioned in the evening prayers for Yom Kippur.

After the community on Mallorca went under, the Aragonese authorities took pains to resettle Jews from Portugal on Mallorca. But the fate of this community was also sealed. In 1435, a blood libel found a willing reception among the masses. Baptism seemed to offer the single way out of this very dangerous circumstance, and also opened the door to certain occupations, such as the spinning of wool, which remained unavailable to “strangers and new immigrants.” [Here Wischnitzer probably means such professions were available only for the converted.]

The descendants of the converts were called “chuetas” [pig-eaters; the Balearic equivalent of “Marranos”]. They became a special class. The Inquisition watched them carefully, and the Christian community avoided and hated them. These baptized ones became craftsmen, especially goldsmiths. However, in 1782, the goldsmiths were locked out of the jewelry business on Mallorca. In the churches, the Chuetas stood shyly together, forced into particular corners. They had a special place in the cemeteries.

The island of Minorca was occupied in 1713 by England, which protected the Jewish refugees. A synagogue was built in Mahon and Jewish life began to unfold. But control of Minorca was threatened by Spain and France. In 1781 Mahon was attacked. Jews and Moors defended the city, and then surrendered. Along with the English garrison, the Jews left the island.

In 1933 the Balearics became a destination for the Jewish exodus from Germany. Low living costs, the mild climate, and the possibility of building a foreign travel industry. Hopefully, a leisurely and well thought out immigration across fixed borders will turn out to be a blessing for the Jews and the land.

← Tisha B’Av and the Indifference in Jerusalem, Israel Today
The Evolution Of American Orthodoxy: An Interview with Yeshiva University Librarian Zalman Alpert →