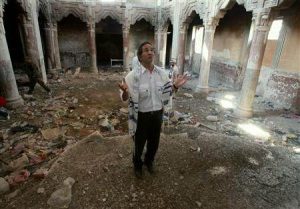 Libya lies in North Africa between Egypt and Tunisia and consists of Cyrenica and Tripoli. Even in the 3rd century before the Common Era, Cyrenica was a destination for Jewish emigration. Over the next century the Jewish population grew in numbers but was strongly Hellenized.

The capital of Cyrenica was Berenice, which today is Benghazi. The population lived under a caste system and the Jews were able to build their own class for themselves and their allies, and they had autonomy. They maintained lively connections with the motherland: In Jerusalem there was a synagogue community of Cyrenian Jews.

During the great revolt that broke out in Cyrenica and Egypt against the Emperor Trajan (115-117 CE), the Jews under the leadership of the messianic king Lukaus conquered the entire land. The revolt was suppressed after many years of fighting. Persecutions of the Jews began under Byzantine rulership in the 6th century. The synagogue in the coastal city of Boreion was transformed into a church.

In the late Middle Ages there was an immigration of Jews into Cyrenica from neighboring Tripoli. Trade with various seaside cities of the Mediterranean provided the Jews with living conditions that were first-class. As was true of the entire Orient, Jews operated silver and goldsmith enterprises. In 1931 the Jewish population consisted of some 3,000 souls, versus a general population of 165,000. In great part they lived in humble circumstances.

Under the Fatimid Dynasty of Egypt (969-1171), there was a Jewish community in Tripoli of about 800 families. Sephardic Jews came to the late in the late 15th century after their expulsion from Spain, and later on, in the 17th & 18th centuries, there was an influx of Jews from Italy. In 1850 the traveling researcher J. J. Benjamin came across these Italian Jews living alongside the natives, though they didn’t have their own community. He praised the piousness of the Jews, listed their synagogues and houses of learning, along with the names of the rabbis and the leaders with whom he came into contact.

In the villages he visited the Jews lived in primitive conditions at the mercy of the Arabs. They feared to wear clean clothes the Arabs might steal from them. These Jews worked in agriculture, cattle breeding, wine production and fruit growing. There were also smithies and locksmiths. As far as Benjamin could ascertain, they were almost the only laboring element among the Arabs, who themselves operated no enterprises and who purchased all they needed from the Jews.

When Tripoli was occupied by the Italians in 1911, there were about 15,000 Jewish inhabitants. They lived in the Old City, separated from the Arabs. Although emancipation was proclaimed under Italian administration, until today few have left the ghetto. The Italian administration built a universally obligatory popular school with instruction in Italian, with Jewish crafts taught to the Jewish children, as in a trade school.

Fifty kilometers east of Tripoli lies the Jewish cave-settlement of Tigranna, by the oasis of Gasr Garia, with about 500 Jewish families. The names of these inhabitants show their origin from the Spanish refugees who came to the land 400 years before. The settlement consists of multi-storied structures grouped around a square-shaped open commons area. The apartments are built about 7-10 meters deep into the ground, and are connected with each other via galleries. A longer, sloping gangway leads into the commons. The apartments have no doors or windows, and clans live together, from the elderly to the grandchildren. A little bit of daylight forces its way through ventilation holes. The commons is where people work, and rooms behind it are all open.

The two prime occupations are agriculture and sheep breeding. The wool is needed for the production of carpets. The community has its own rabbi, school, and doctor. The Italian administration has altered nothing of the customs and habits of the cave-dwellers, but has provided a teacher who instructs the children in Italian. The synagogue is set up in an upper-level, is walled, and furnished with wooden accessories. The shrine protects an old Torah scroll, probably brought with them from their old Spanish homeland.

There are Jewish settlements farther away in Dschebel-Jeffren and Dschebel-Nefussa; there are also a lot of Jews scattered about the land. In 1931 there was a count of 21,342 Jews versus a general population of 552,663, of whom about 20,000 were Europeans.

The Jews of Tripoli show their longing for Zion in this way: Men, women, and children make paper ships, display them in the synagogue, and say, “With such ships we will journey to Jerusalem.”