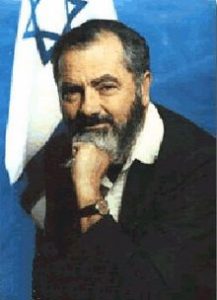 It’s a real wonder how many people forgot Rabbi Meir Kahane’s legacy. Some younger people think he was one of the prime ministers of Israel (seriously). Some think he was a Greek god (joking). Others don’t know who he was at all.

Rabbi Meir Kahane was Z”L an American Orthodox Rabbi who fought against anybody against Jews. When he was a Rabbi in Skokie Illinois, he rallied against Neo-Nazis. When he was in Israel, he rallied to throw out all Arabs in Israel since many were seeking the destruction of the Jewish people. His political activism spurred him into the Knesset where he won 1 seat. That consequently nullified his American citizenship since he then held office in a foreign government. Rabbi Kahane was a very controversial figure as he was “right” but very extremist even for the most right-wing of peers.

Rabbi Meir Kahane was tragically shot to death on November 5, 1990 (17 Cheshvan, 5751) by Arab terrorist El Sayyid Nosair, an Egyptian-born American citizen who was initially charged and acquitted of the murder. This is in honor of his 22nd Yahrtzeit which happened not too long ago. Enjoy!