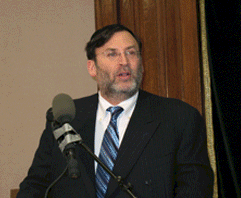 “Dear Rabbi Wallerstein,
As an avid listener to your Shiurim, I listened with both great interest and shock to your recent Shiur on Hurricane Sandy at Chazaq via TorahAnytime. In that lecture, you mentioned that “the perfect storm” occurred because New York passed the law on legalizing gay marriages. You brilliantly tied in the fact that the two main movements each occurred prior to a major storm, first with Irene and then Sandy. You also mentioned that the best sign is that, unlike the Mabul with Noach where the fish at least survived, the fish which symbolize Pru U’revu died (i.e. eels in the basement) died and made the city stink. This, you said, is a warning for us to not allow our species to die out by two men not being able to perform the Mitzvah of Pru U’Revu.

I’m not shocked at the fact that you made that speech. In fact, I expected a number of Rabbis to have a field day with this one (see

What does shock me though is that it seems inconsistent for two reasons:

1. If the whole reason was because New York is a “gay state,” then how does that explain New Jersey, which is not a “gay state” and has Lakewood full of Talmidei Chachomim, getting hit even harder? Also, for that matter, Ontario, a “gay province” was barely touched! There’s a HUGE inconsistency there!!!

2. From what I understand, the Only One who can say that “B” was caused because of “A” had to have control of the bigger picture, and that “A” was the defining catalyst. By you, or anyone else for that matter, saying that “B” was caused because of “A,” i.e. Sandy being caused by Gay marriages being legalized, it seems though that you are aware of everything that’s going on, and that you know all of the Cheshbonos of the Tzibbur. You may be a Cohen and a man of Gd, at least that’s what you mentioned in the speech, but with all due respect, I don’t believe that gives you the right to play Gd! I find that this falls under the 2nd commandment of not having other Gds before Him, where you claim to think that you know as much as Him!

Here’s what I respectfully think: New York AND New Jersey were both hit because the world stands on Torah. What is Torah on one foot, according to Hillel? Don’t do to others what you wouldn’t want done to yourself, i.e. be nice to others. Having myself lived in New York for over 24 years and encountered many Lakewood families, I have a completely different opinion: Sinas Chinam (baseless hatred) is what did it. People are very quick to find reasons why this person is a bad Shidduch prospect for that person (i.e. not frum enough), a million reasons why this child can’t get accepted into such-and-such elitist Yeshiva, why people can’t wish each other Gut Shabbos on the street, etc. These are basic elements that I think we’ve forgotten when worrying about everything else being mehadrin min ha-mehadrin, such as only having Chalav Yisrael, Glatt Kosher, and the biggest pair of Tefillin. It wasn’t that long ago when Yeshivas were a rarity and Rabbis accepted Talmidim with open arms rather than rejecting them like we see in our generation. Arguably, people without the black hat years ago had more of the “real” Torah than today, when the time of day was actually given to another person. Bottom-line, New York and New Jersey aren’t standing on Torah, but rather on mere Halachos and Minhagim.

In Toronto, by contrast, there are at most 15-20k Jews living here, comprising the majority of Canada’s Jews, and I find that people here are more polite, though that may change in the next 10-20 years as more New York Jews like myself are moving up here and influencing the laid-back, friendly atmosphere to a more aggressive, pushy, high-traffic, in-your-face one.

But then again, we cannot play Gd, so who’s to say why it happened?”

Note: To his credit, Rabbi Wallerstein attempted to clarify what he said, amid a slew of hate mail.

← The Shuls on the Desert Island
The Thanksgiving Dinner →