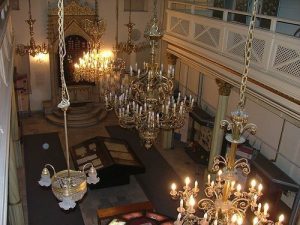 European Turkey in its present form consists of the small region around Istanbul, Adrianopolis, Kirkilisse, and Rodosto. For the history of the Jews, the cities Adrianopolis – today’s Edirne, and the capital from 1361 – 1453 – and Constantinople – today’s Istanbul, capital since 1453 – come into consideration. Both cities once had thriving Jewish communities, but show signs of going under today.

The settlement of Jews in Adrianopolis goes back to the time of the Emperor Hadrian (117 –138), who abducted Jews from Palestine. The settlement in Constantinople proceeds forth entirely from the time of Constantine the Great (312-337), and was mentioned in the old Jewish sources.

The Jews lived in the center of the city, near the Hagia Sophia [a masterpiece of architecture constructed in the 6th century by the Emperor Justinian as a cathedral, still standing today as a mosque]. Until the Turkish conquest (1453), the Jews lived continually in Constantinople, as well as in the suburb Pera, in spite of the anti-Jewish politics of the Byzantine rulers.

In the 9th century Constantinople stood at the center of a widely stretched-out system of international trade between Western Europe and the Orient. Benjamin of Tudela (1170) estimated the Jewish population of Constantinople at about 2,500, plus about 500 Karaites. The Jews busied themselves as traders, silk workers, glass-blowers, and metalworkers.

In the 14th century, when the Turks, step-by-step, conquered various regions in the Balkans, the situation of the Jews changed. The Turkish rulers exercised patience with the Jewish faith, and imposed no restrictions upon those who confessed to it. As a consequence of the Black Death of 1348 and 1349, this new Turkish kingdom beckoned to the surviving Jews of Western and Central Europe. So Jews from Germany, France, and Hungary moved into the occupied Turkish districts. In 1360 Jews from Hungary settled in Adrianopolis and founded a community called “Budun,” named after the Hungarian city of Buda [half of today’s Budapest].

Another group of Jews, with Rabbi Isaak Zorfati, were expelled from France in 1394, also settled in Adrianopolis. Soon thereafter there were Jewish refugees from Spain, under the leadership of Rabbi Chanoch Sasportas. There were also more Jews from Germany, and a great number of Italian-Jewish émigrés, who established the agricultural communities of Apulia, Italia, and Sizilia.

On the counsel of Jewish immigrants from Germany, in 1428 Rabbi Zorfati issued a call to the Jews in Swabia [southern Germany], the Rheinland, Steiermark [in Austria], Moravia, and Hungary, telling these Jews to come to Turkey.

On May 29, 1453, Constantinople fell into the hands of Sultan Muhammad II, an event of great general historical significance that had a special meaning for the Jews of Europe. The chronicler Elia Kapsali, who has described the conquest, quoted the Sultan: “The Sultan…had a decree issued throughout his entire empire: ‘Hear, you descendants of Jews who live in my land! Let any of you who wishes, come to Constantinople, and may the rest of your people be sent for here!’ And from all directions under Heaven streamed great hosts of Jews there, and the Sultan steered them to various neighborhoods in Constantinople, where they established stable roots…and he had them build domiciles and houses of learning, and established three sitting places in the royal council, one for the Mufti the Ismaelite, another for the Greek Patriarch, and another for the Jewish rabbis, so that all three peoples could be led by a single leader.”

The Jews at that time perceived the spreading of Turkish power as a “direct triumph of divine Providence.” One could be a Jew, and being Jewish was no disgrace. That was a great comfort and fortune.

When the Turks conquered Constantinople they encountered three Jewish communities: Jews from Greece, Germany, and Italy. The Jewish settlements increased rapidly. Already at the beginning of the 16th century the city shaped itself as a major Jewish center, similar to the significance of today’s New York. At the beginning of the 16th century there were an estimated 18,000 Jews in Constantinople, and by the middle of the century some 50,000 – an unheard of number for that time in history.

← The Waiter and Jewish Mothers
Three Men of Faith and Money →