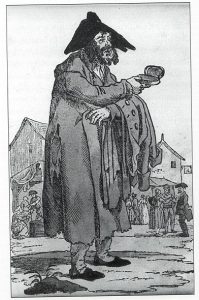 An Israeli tourist alleged to have stolen thousands of dollars from women in Toronto’s Jewish community was caught in the act Wednesday, police say.

Israel Aharonovitz, 63, is charged with four counts of fraud under $5,000 and police suspect he may have victimized people worldwide in the past year.

Going as far back as November 2011, Aharonovitz would ride the Spadina-University subway line and would befriend women whom he would ask for money, police said.

Under a false name, Aharonovitz would spin a yarn about sick relatives needing expensive treatments and other money woes.

He would promise to repay them upon his return to Israel, even offering a fake telephone number, police said.

Some victims would hand over the cash but often times they would go to a nearby ATM.

He acted under cover of religiosity: Aharonovitz would tell his victims that giving him money would be a mitzvah.

In the Jewish tradition, a mitzvah is a charitable, beneficial act, for which the giver will be spiritually rewarded.

Aharonovitz was arrested yesterday after undercover police detective spotted him attempting to solicit money from a woman on the platform of Glencairn station just after 11 a.m. Police said he had a small amount of cash on him.

Aharonovitz is known to have worked this scam across the Atlantic.

Dubbed the “Tube Shekel Scammer” by the U.K. press, Aharonovitz was convicted twice for pulling a similar scheme on the London subway and served more than two years in a British prison.

Since issuing a public alert Tuesday, Toronto police have been flooded with calls, including some from New York City, from people claiming to have also fallen prey to the scheme.

According to his passport, in 2012 he travelled to Australia and the United States. Police are surprised that he was able to travel in spite of his British conviction.

“Your guess is as good as mine,” said Turnbull. “Hopefully with a little publicity, we should help prevent that.”

Originally seen on The Toronto Star.