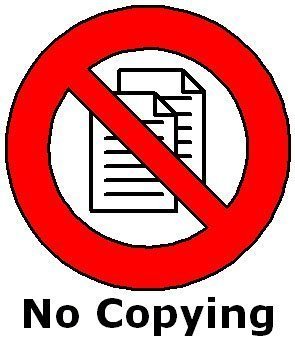 One doesn’t have to be very smart to make copies of tapes, CD’s, books, or computer programs. Modern technology makes it so easy for us to cheat or steal that the temptation is very great. Why pay $500 for a computer program if we can make a copy of it for only a few dollars? Why buy a tape or CD if we can make a copy of it for pennies? Why buy a coloring book if we can make photostat copies of it for half the price. The chances of our being caught or prosecuted are very slim. While we may know that copying is a form of theft, we make many rationalizations for it. Firstly, we have the “everyone does it” syndrome. Some believe that the producers charge too much or are making plenty of money anyway. Others rationalize that they wouldn’t have bought it anyway so the producers are not really losing any money. That’s like the person who steals a cookie from the bakery with the excuse that he wouldn’t have bought it anyway or the person who stole a car that was parked in front of a cemetery in the belief that the owner had died. When I once saw a yeshivah student making copies of a CD for all his friends I asked him on what he based his heter? He explained that he buys the tape “b’shutfus” ( in partnership ) with all his friends and therefore they all own a share in it. This, he said, gives him the right to make copies for them. After all, he reasoned, he is only making copies of his own possession. This reminds me of the person who was arrested for counterfeiting $100 bills. When the judge asked him why he did it, he replied that the original $100 bill belonged to him and therefore he had a right to make copies of it. It seems that modern technology has brought along with it a new morality and sense of ethics. As long as you can get it for free, it doesn’t really matter how it’s done.

Because of modern technology, the piracy of other peoples property rights have become endemic, yet it is just as forbidden as picking someone’s pocket and is forbidden both by Torah law and American and international copyright law. When selling a product, one has a right to attach a condition to the sale. According to Halachah, it is absolutely forbidden to copy a product that was sold on the condition that it not be reproduced.

Of all the sins of Noach’s generation, which included the three cardinal sins, their fate was sealed because of the sin of theft! The makers of these books, tapes, programs, and the like, spend thousands of dollars to produce them. Billions of dollars a year are lost on account of this type of theft. One of the seven Noachide commandments is to make laws for the public’s good and welfare. Why would anyone produce a tape, book or computer program if everyone can make himself a free copy?

Despite the lawsuits recently filed against hundreds of people accused of distributing music over the Internet, millions of others continue to copy and share songs without paying for them. The lack of guilt over online copying suggests that people don’t see anything wrong with it when in fact it is no different than stealing a CD from a music store. In a recent survey, 63% of the people surveyed said they did not care much about the copyright on files they copied onto their computers and they felt that it was perfectly acceptable to share copyrighted files. Legality seems beside the point as they click their way through licensing agreements, impatient to receive the software at the other end. Many experts argue that legal prohibition alone is rarely effective in getting people to behave differently if it runs counter to strong societal beliefs. ”It’s wrong to be downloading hundreds of songs, but if you only want one or two, it’s no big deal,” said a young student I asked. That’s the philosophy of the people of Sedom I replied. Everyone would take only one brick from the large pile of bricks standing in the street and soon there would be none left. If they download just a little bit, and not a lot, then it’s less wrong goes their Chelemite logic.

One wonders why some that are so very stringent and keep every custom even when it may have little basis in halacha are so very lenient with questions that involve theft that is based on Torah law?

One yeshivah student told me that he used to make copies but stopped doing it when his rebbi told him it was genaiva. He even destroyed all the copies he had made and called the copyright holders to ask them for forgiveness for what he had done. This is true teshuvah! People must realize that this kind of theft has real victims and robs artists and producers of their livelihoods.

It’s extremely important that parents and Rebbeyim discuss the moral and ethical applications of these matters so that we are not taken to task for our complacency. Certainly, any Yirei Shomayim would stop doing it if he knew the din is very clear on these matters. When the school gets permission from the copyright holders to make copies of a particular page, it’s important that they write “copied with permission” on the paper so that their students don’t get mixed signals from those who are responsible for teaching them right from wrong. For all the halachic ramifications see the sefer titled Mishnas Zechuyos Ha’yotzrim .

P.S. Permission is hereby granted to make copies of this article.

← A Mezuzah’s Great Powers
The Letters of the Aleph Bais →