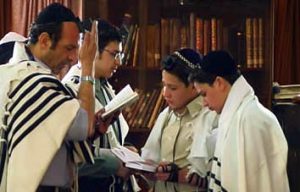 The present kingdom of Persia, which recently officially took the name “Iran,” encompasses a region of over 1,640,000 square kilometers with about 15 million inhabitants. The most important cities are the capital Tehran as well Tabris, Mesched, and Isfahan (the former capital).

The history of the Jews in Persia began under Cyrus, who conquered the Babylonians in the year 539 BCE. With regard to the distribution of the Jews in the Persian heartland at this time, there is very little information. The great mass of Jews lived in Babylon.

The Jews of Persia stepped into the light of history for the first time in the Middle Ages. There were great communities in Isfahan and Hamadan in the 12th century. Benjamin of Tudela spoke about 15,000 Jews in Isfahan and 50,000 in Hamadan. The Jews of Isfahan trace their origins back to the captives who were abducted from Judea by Nebuchadnezzar.

In the 7th Century (CE), Persia had a continually large Jewish community. In order to escape from the forced conversions of the Arabs who occupied Isfahan, the Jews left, and their synagogues were converted into mosques. However, shortly afterward new and successful Jewish settlements arose.

Isfahan reached its zenith in the 17th century, when it was a center of trade between India and Europe.

The Jews of Hamadan were not so lucky. The city was unable to recover from the shock of Tamerlane, who laid waste to the city in the 14th century. The persecutions under Abbas I and Abbas II in the 17th century gave the Jews there the final push out.

Benjamin of Tudela stated that in Hamadan the gravesites of Mordechai and Esther were venerated. It was more recently alleged that the Jewish-Persian minister Saad al-Daulah and one of his wives was buried in these cemeteries. Saad al-Daulah served under the Mongolian ruler Argun and was murdered by mob violence in 1291 after Argun’s death.

The downfall of Persian Jewry could no longer be held back. Law forbade Jews from entering Muslim homes and they were forced to live in ghettos. They were unable to leave the ghetto during rainy weather because, according to Shiite sensitivities, contact with damp clothing worn by the impure imparts ritual uncleanliness. The Jews had to wear a red cloth on their chests as a recognition device. The revolution of 1920-1921 set aside the restrictive laws.

The Jews employ themselves in trade and industry. In handicrafts they’ve been very skilled. From a certain Jewish source we learn that in the middle of the 19th century Persia had Jewish silk-weavers, glassblowers, construction workers, tailors, cobblers, and blacksmiths. The Alliance Israélite undertook to build vocational schools in a number of Persian cities in 1898.

There are a number of Jewish-Persian dialects spoken. The Jews of Schiras speak differently from the Jews of Isfahan and from the Jews of Tehran. The Persian Jews have their own rites, which are used from the Caspian Sea to Calcutta and from Baghdad to [China].

In the 19th century, Persia saw an influx of Jewish doctors, merchants, and industrialists moved to Persia, mostly from Russia. Since 1933 [Translator’s Note: The year of the Nazi takeover of Germany] they have been joined by Jewish engineers and doctors from Germany. There is a marked emigration of the native Jewish population to Palestine.

The number of Jews living in Persia is estimated at 50 – 60,000. Tehran can count 10,00 Jews, and larger groups can be found in Isfahan, Hamadan, and Schiras, and smaller numbers can be found in Kaschan and Yezd. In Mesched there live secret Jews who despite persecution have remained loyal to Judaism. It is their plan to emigrate to Palestine.

The kingdom of Afghanistan is a rugged land of high mountains with a surface area of about ¾ of a million sq. Km. [about 300,000 sq. miles] and an estimated to have a population of about 10 million. It is bordered to the north by the Soviet Union, to the east and south by India, and to the west by Persia.

The Afghanis regard themselves as the descendants of King Saul. A chronicle from the 16th century says that the Afghanis were deported to Afghanistan by Nebuchadnezzar after the destruction of Jerusalem. There are synagogue ruins in Kabul that can be traced back to Nebuchadnezzar’s time.

In the 1830s, many Jews fled Kabul in consequence of a prohibition against the growing of grapes and production of wine. Nevertheless there was a significant Jewish settlement in Kabul in the middle of the 19th century. The trading connections of the Jews of Kabul reached into China.

In Afghanistan the Jews speak Jewish-Persian. They composed their guides to law and religious writings in this language. The rabbis functioned like judges. The previous estimate that 18,000 Jews live in Afghanistan is now seen as an exaggeration; it is more like 5,000. There still exist ghettoes in the cities that are locked up after dark. The Jews wear a particular black kind of headcovering. They live in Kabul and farther out in Heart, Balch, Kandahar, and Ghasni.

← The Oslo Accords
PLACEBOS: The Power of the Mind →