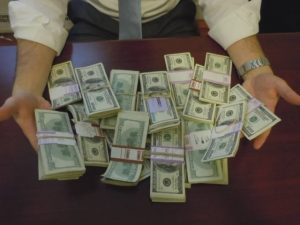 Earlier last week, a big Kiddush Hashem spread through the western world when a young Rabbi from New Haven, Connecticut purchased a desk online from Craigslist, found that the desk wouldn’t go into his office by a fraction of an inch, and was forced to dismantle it. While dismantling it, he found that through one of the drawers was a $100 bill. Upon opening the drawer, he found a shopping bag with $98,000 worth of $100 bills.

It turns out that the woman who sold the desk received inheritance money, stored it away and later on forgot all about it. The Rabbi told his wife “we can’t keep this money,” called the seller up and cheerfully returned it. He finished with “the most important thing in life is to be honest.”

This comes right after the whole story of the Jewish man that let a black man sleep on his shoulder while on a subway train. According to the Daily News:

Oscar “Isaac” Theil, 65, was on his way home to the Kensington section of Brooklyn on the Q train when an unidentified man fell asleep on his shoulder for more than a half hour last Thursday night.
Another rider was amazed at the scene — a black man sleeping on the shoulder of a white man in a yarmulke — so he gently asked if he wanted help to wake the slumbering straphanger.
“He had a long day so let him sleep. We’ve all been there,” Theil responded.
The other rider captured the moment with a quick cell phone picture that he then posted online with a brief explanation…

This is what we Jews are all about. We look at the larger picture and are first and foremost considerate of the others’ feelings. I am reminded about the story of R. Shimon ben Shetach was in a similar situation (Yerushalmi Bava Metzia , ii. 8c). The Pagan merchant from what I recall selling the donkey when a jewel was found in the saddle. The jewel was clearly not part of the transaction and when his students said, Keep the jewel, it’s yours by right of purchase, he responded “I am not an uncivilized boor”–and he returned the jewel to the (pagan) seller. When R’ Shimon returned it was told by the merchant, “Praised be the God of Shimon ben Shetach!”

Not to be outdone, R’ Yaakov Felder told the above story of the $98,000 at Shomrai Shabbos and related it to Yaakov who was living with Lavan and yet didn’t get influenced by the corrupt, deceptive society that surrounded him for 20 years. From here it’s clear that this is how we should all behave, as people that always have the Taryag Mitzvos to watch over even though in all practicality it’s not possible. However, the idea should still be there when we go out into the world and interact in a society that may have values different than ours.

← Brochos for Breakfast
Parshas Va’Yeshev – Shaming a person in public →