The city of Chevron – also once called Elonei Mamrei and Kiryat Arba – is known as one of Eretz Yisroel’s four holy cities. (The others are Yerushalayim, Tzfas and Teverya.) It is located approximately 20 miles southwest of Yerushalayim and lies about 3,000 feet above sea level. It was here that our Avos lived for many years and it was here that Avraham’s wife Sara died. It was also the city in which the great four giants Shesai, Talmai, Achiman and their father Arba (or Anak) lived. It was here that Dovid was proclaimed king and ruled for 7 1/2 years before going on to Yerushalayim and turned it into his capital. This city also served as one of the three Orei Miklot – cities in which those who killed someone inadvertently (b’shogeg) could find refuge. The other two cities of refuge were Kadaish up north and Shechem. It was also here that his son Avshalom rebelled against him and had himself proclaimed king. While the city belonged to Shevet Yehuda, it was actually given to the Leviim (the Kahati). It was the city captured by Kolev ben Yefuna and the fields of the city and its villages were granted to him by Yehoshua in accordance with Moshe’s instructions . (Yehoshua 21:11-12). 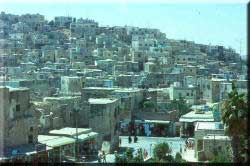 As one drives through her outskirts, one can see the fields filled with fig trees, olive trees and grape vines; three of the fruits that Eretz Yisroel is noted for.

When the Jews were exiled from Spain during the sixteenth century, they established an area here which became known as the Jewish Quarter. Here they lived for more than 450 years. Here they built a shul which they named the Avraham Avinu Shul, one of the most beautiful and renowned shuls in the country.

During the eighteenth century many Lubavitcher Chasidim moved here as well. In 1879, Avraham Romano, a wealthy Jew from Turkey built a beautiful house known as Beit Romano. In the 1900’s an additional floor was added and a medical clinic by the name Beit Hadassah was opened.

In 1925, the Yeshiva of Slobodka moved from Lithuania to Chevron. In 1929 the Jewish community numbered about 1,500 persons.

In 1929, the Arabs broke into the Chevron Yeshiva and massacred more then 50 people in cold blood. Because of the constant Arab violence, the Jews of the city were forced to leave. The riots were instigated by Haj Amin al-Husseini who had been appointed by the British as Mufti of Jerusalem. The riots started on Friday afternoon, August 23rd. Hordes of marauders attacked every Jew they saw. The next Shabbos, Aug. 24th, thousands of Arabs armed with knives, axes and pitchforks launched an attack on Jewish homes. The bloodthirsty mob killed, wounded and tortured the Jews in a most barbarous manner. Three days later, the British loaded the remaining Jews on trucks and evacuated them from the city. The old Avraham Avinu Shul was torn down and replaced by an animal stable. The ancient Jewish cemetery was completely destroyed.

In 1948, the U.N. gave this city to the Arabs and no Jew was allowed to enter it. It was only in June of ’67 (the Six-Day War) that the Arabs fearing revenge, surrendered to the Israeli Army without a single shot being fired and Jews could once again pray at the Meoras Ha’Machpelah.

Jews have always lived in this holy city except when they were banned to live there by their foreign rulers. In 1971, religious Jews built a beautiful town in the outskirts of Chevron and named it Kiryat Arba. By 1996, Kiryat Arba had a population of about 7,000 people.

In 1979, a group of ten women and 40 children succeeded in entering the building in the middle of the night and remained in the demolished building for more than a year under very harsh conditions. They had no water and electricity and were cut off from their families. The government had put up a closure around the building. One Friday night in 1980, a group of yeshiva boys were attacked on their way there by terrorists who killed six of them. Only then did the government finally decide to allow restoration of the Jewish community of Chevron. 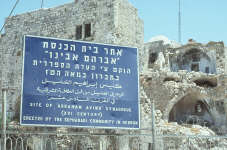 The ancient Jewish Quarter was now reconstructed and the Avraham Avinu Shul was restored into an exquisite architectural masterpiece. Beautiful new homes were built. The wholesale produce market, built on the ruins of the old Jewish quarter was closed off. Beit Hadassah was renovated and rebuilt.