Megiddo is one of the oldest cities in the whole world. It is located a few miles southeast of Haifa. The city was built like a great fortress on top of a mountain. In olden times, two important roads passed by the city. One road lead from the Mediterranean Sea to the fertile plains of central Eretz Yisroel. Another road led from Egypt all the way to the countries of Ashur (Assyria), Persia, and Bavel. Whoever controlled Megiddo, controlled the crossroads of the Middle East.

Megiddo was captured by Yehoshua and given to the tribe of Menasheh. The inhabitants of the city were too strong to drive out but they were made to pay taxes to Menasheh. (Yehoshua 12:21, Shoftim 1:27)

In the days of the prophetess Devorah and Barak, the enemy general was Sisera. A big battle took place at the River Kishon, just outside of Megiddo. Hashem made a great miracle occur and the entire enemy army was swept out to sea. Sisera was killed by the righteous woman Yael. When Sisera did not return home from the battle, his mother realized his army was defeated and he was killed. She cried for her son one hundred times. Our chazal say that on Rosh Hashana we should blow the shofar one hundred times too. If an evil enemy of Klal Yisroel deserves a hundred cries then surely the shofar must cry out for us at least one hundred times. (Shoftim 5, Rosh Hashana 33b)

Devorah mentions the city of Megiddo, the battle near the River Kishon, and the death of Sisera in her famous song, Shiras Devorah. It is recited as the Haftorah when we read Parshas Bishalach, which has in it Oz Yashir.

Megiddo was finally captured by the time of Shlomo HaMelech. He rebuilt the city and even had a palace there. (Melachim I 9:15)

Megiddo is associated with the deaths of two kings. Achaziah, the King of Yehudah, was assassinated by Yehu, the future king of Yisroel. Achaziah succumbed to his wounds and died in Megiddo. (Melachim II 9:27) 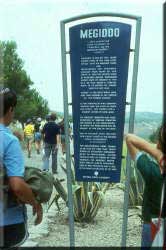 The Egyptian king Necho was passing through Eretz Yisroel to go to Ashur to wage a battle against the Assyrians. Without consulting the Navi Yirmiyahu, the righteous Melech Yoshiahu went out to meet Necho in a battle at Megiddo. While Yoshiahu was leading his troops on his chariot, an archer’s arrow severely injured him. He was taken to Yerushalayim where he died shortly afterwards. Yirmiyahu cried bitterly over the death of the tzaddik and called him “the very breath of our nostrils, the anointed of Hashem.” Chazal tell us that when Yoshiahu died, it was one of the greatest days of mourning ever to befall Klal Yisroel (Melachim II 23:29, Divrei Hayamim II 35 22:24, Eicha 4:20, Taanis 22b, Moed Katan 25b)

Megiddo was last inhabited by a garrison of Roman soldiers after the churban of the Bais HaMikdash. Shortly after that, it was abandoned, never to be inhabited again.

Throughout its history, Megiddo was built and rebuilt, twenty-five times. War after war, battle after battle was fought there. In the last century, the French Emperor Napoleon fought a battle there. In the twentieth century, in 1918, the British fought the Turks at Megiddo. The British won the war and took Eretz Yisroel away from the Turkish Empire. The 400-year rule of the Turks in Eretz Yisroel had come to an end.

The ruins of ancient Megiddo can still be seen today. There are the remains of the ancient massive city gate built by Shlomo HaMelech, royal stables, homes, and an interesting underground water system. Archeologists have found the remains of more than 25 cities lying one beneath the other. On the top of the mountain one can see a circular stone structure that presumably was once a mizbayach used or idol worship.