After the old city was recaptured from the Arabs in 1967 and the rebuilding began, many interesting discoveries were made. Many relics from the past were uncovered and can now be seen. Here are some of the interesting places you may want to visit. 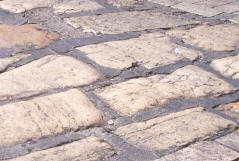 For many years no one seemed to know how far the ancient city of Yerushalayim reached out into the north. No one seemed to know where the northern wall of the city once stood. There was much speculation as to how far north the city extended. The discovery of this wall (in 1970) which dates back to the time of the first Bais HaMikdash, finally ended the debate. Standing on the corner of Rechov Plugat Hakotel one can see what is left of this ancient wall.

The wall is about 23 feet wide and only about 10 feel tall. The original height was probably more than 25 feet.

A little farther down the street they discovered an ancient tower more than four meters thick and still standing about eight meters high. Here they also found the remains of arrowheads and ashes probably dating back to the time of the destruction of the first Bais HaMikdash. Built into this tower is another tower from the time of the Chashmonayim.

Here stands a house dating back to the time of the destruction of the second Bais HaMikdash by the Romans. One can see charred wood, burned vessels, a Roman spear, a mikvah and even the skeletal remains of a woman’s arm.

Most of the vessels found here were made of stone. That’s because stone does not become tomei (unclean) when it contacts something that is tomei . In fact, one of the weights found here, had the name Bar Katros on it. This is the name of a family of Cohanim mentioned in the Gemorah (Pesochim 57). One must pay to get into this house and you’ll get to see a beautiful slide show giving you a full explanation of what life was like in those days, and the discoveries made here.

The Cardo is one of the two main streets of the ancient Roman city that once stood here. After the destruction of the Bais HaMikdash, when the Romans captured the city, they kept these streets as a marketplace. One can see the remains of the giant columns that once stood here. They stand more than 16 feet high. The width of the road was more than 50 feet including the sidewalks. Along both sides were the markets.

The wells you see in the middle, allow you to look down and see the original street that once stood here. One can also see parts of the ancient walls from the times of the first and second Bais HaMikdash.

When they began building the Yeshivat HaKotel and dug build to put up the foundation, they made some startling discoveries. You must pay to enter this fascinating museum in the basement of the Yeshiva. Here you can see what the houses once looked like nearly two thousand years ago. There are some very interesting mosaic floors, stone furniture, ornamental artifacts, mikvaos as well as wall paintings called frescoes. There are signs that explain everything.

Here one can also see some interesting discoveries such as water cisterns, mikvaos, and mosaics.