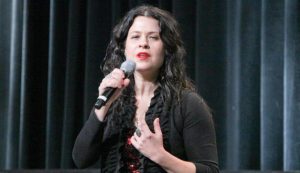 Like many, I too recently read about Neshama Carlebach, Reb Shlomo’s famous daughter, making what she called as her “Aliyah” to reformed Jewry. Her reasons from what I read were purely emotional. She felt ostracized by the Jewish community when she saw how her father was put down for his controversial tactics, which mainly included hugging/kissing single girls and married women. He claimed to have done this out of great joy and love for his fellow brothers and sisters. He also gave his daughter Neshama a platform to sing, which she enjoyed greatly. Singing about praises for Hashem greatly uplifted her spirits and like a drug, she wanted more of it. However, this wasn’t proper in the “mainstream” line of Orthodox Judaism.

It therefore to me makes sense to a degree why Reformed Judaism would appeal to a neshama like Neshama’s. Conservative and Reformed Judaism differ in that they have no problem with making streamlined Torah and Mitzvos optional, focusing more so on the “spirit of the law” rather than the “literal interpretation of the law.” Reb Shlomo Carlebach did this, albeit within the scope of Torah Judaism, which made him both extremely popular and controversial at the same time.

Neshama wanted to be accepted for who she was, and be allowed to do what she did. The focus on Tikkun Olam among Reform appealed to her caring, helpful nature. It also helped that her negative impression of Torah Jews rejecting any creativity made her see how hypocritical it seemed to be, leading her to consider alternative paths to Gd.

Now that I summarized what I felt was the message Neshama was conveying, allow me to offer my (gentle) critique.

Spirit of the Law

First, regarding the “spirit of the law.” One should do things in a manner befitting what was intended. However, the details needs to be observed as well. Consider two sets of keys: one is a set of keys found on a floor and one is an actual set of keys one has for a set of doors. The first set are keys: it’s spiritual essence is meant to open any door. However, they will only open the doors they were designed for, and will not work for the doors one would like. The second set of keys, though, meant for a specific set of doors, will open the doors intended for.

A more serious example can be seen with hospitals and exact protocol. If a staff member disregards protocol and does what s/he wants, that person can lose ones license as every procedure is meant for a reason (I remember a hospital chaplain telling a charge nurse this once when it was Erev Shabbos, we needed a room, and while the chaplain was explaining this to the charge nurse, the charge nurse explained that if need be, we’d have to break some laws. That didn’t go off too well, hence the above statement).

Bottom-line, every Halacha, Chok, Din and Mishpat was created for a reason, though we don’t know the significance of each one. What I do know is that I personally wouldn’t want to lose my “Jewish license!”

The above having been said, let’s talk about Tikkun Olam. Tikkun Olam, fixing the world, is a wonderful thing if you know what you are doing and are doing it the right way. For a (simplistic) example, does it make sense giving perishable Shabbat food to someone that has tons of food for Shabbat and will likely be forced to throw your food out?

The point I’m trying to get at is, to do real Tikkun Olam, you need to be prepared in order to not only know exactly what to do that would help all around you, but to make better judgement calls in terms of what helps and what doesn’t.

Making Fun and Being Jerks

Now, for people making fun of her and being jerks. Guess what: you have jerks no matter where you are. I like to say that there are two types of Torah-observant Jews: religious and ritualistic Jews. Those that are ritualistic are going through the motions for all sorts of reasons besides the main point (e.g. tradition, the social aspect, family pressure/yichus, etc.). This is sad. Those that go through the motions with proper Kavannah, the ones with nothing to lose, are the real religious ones in my personal opinion.

I have a feeling that Neshama will end up being terribly disappointed in the end with the watered-down version of Judaism she’s taking in exchange for the gift she had before. She’s exchanging one set of problems for another. Not only that, but conservative/reform have their own political issues with one-upmanship and hierarchy. For example, whereas it’s relatively easy to get High Holiday seats in an Orthodox shul, try being so lucky getting such good seats at a Temple.

There is a lot more I can go on about, but feel that what I just wrote brings home the point. Torah Judaism is what you make of it, and is yours to make for yourself. Once that revelation is arrived upon, I sincerely believe that all other emotional issues with “he said/she said” will fall away.

I understand that I cannot judge someone unless I was in that person’s shoes. However, the grass sometimes is not greener on the other side. Sometimes, it’s only as green as you make it to be.