Tzfas- which means to look- is the highest town in northern Eretz Yisroel, resting 2,780 feet above sea level. It was one of the mountains upon which torches were lit in order for the people to know when the new month began. It received its great fame during the 16th century as being the city where the great Kabbalists lived.

Being on a mountaintop with cool fresh air, it has become a favorite summer resort. 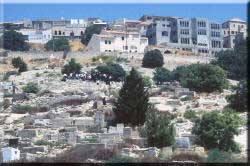 Along the side of the mountain, just above the ancient cemetery, lies the Ari’s mikvah. It is believed that anyone who dips himself into its waters will not die without first doing teshuvah (repenting).

Some of the interesting shuls to visit are the two shuls of the Ari, the Yosef Karo Shul, the Abuhav Shul and the Yosef Banai Shul.

You may also want to visit the Candle Factory

You can watch them design some of the most colorful master pieces all out of wax.

In the year 1759 and again in 1837, much of the city was destroyed by earthquakes and many Jews were killed and the shuls destroyed. These shuls we now visit have been rebuilt on their original sites. 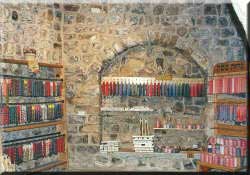 One can also visit the cave of Shem and Ever, Noach’s son and grandson. It is said that it was here that Yaakov Avinu studied for 22 years, before going on to Lavan’s house.

During 1948, the city was in great danger of falling into Arab hands. It was a great miracle that caused the Arabs to flee for their lives. The story of the Davidka gun that made lots of noise but could do little damage, stands in the main square in order to commemorate this great event.

← Tverya (Tiberius)
The Jew and the Hotel →