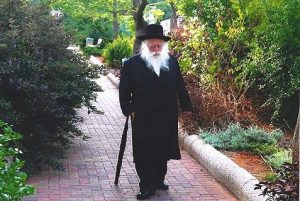 Rav Chaim Kanievsky is one of the most respected rabbinic leaders in the Charedi world. He is the son of the Steipler Gaon. And the son in law of Rav Elyashiv. He has written many Seforim on Halacha and Hashkafa. His mind is encyclopedic. His advice is sought everywhere.

In matters of public policy, I have disagreed with him. I believe that in some issues he is not fully informed before he makes decisions. Although I think he probably believes he is.

But every once in a while something is said (or in this case published in writing) that is so outrageous, that I have to assume it is an outright lie. There is no way that Rav Kanievsky could say this. Not if he knew the actual Metzius (reality) of the situation. I have to assume that anything he said along these lines is either a completely lie, or a gross mischaracterization of what he said, or a complete misunderstanding of the Psak. 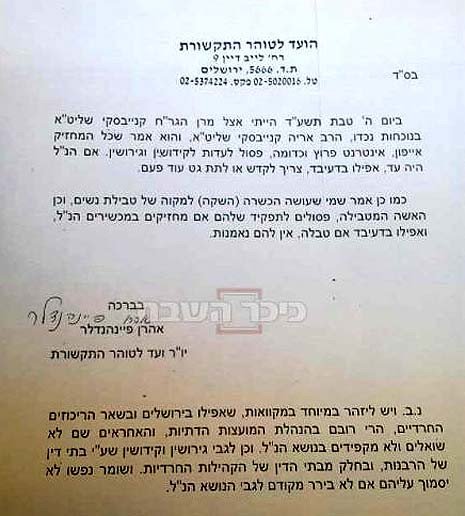 Rafi’s ‘Life in Israel’ blog features a photocopy of a letter by someone named Aharon Feinhandler who heads an organization called, Vaad L’Tohar Hiskashrus. In it he claims to have received a Halachic ruling from Rav Kanivsky about people who own any device that can access the internet. From Rafi’s blog:

A person cannot be a witness at a wedding or at a divorce, and one who did act as such a witness will invalidate the proceedings, even bdieved (after the fact) . The wedding should be performed again, and the get should be given again. This means that there are thousands of adulterers, eishet ish, mamzerim walking around out there without even knowing it.

Rav Feinhandler, director of the committee for purity in communications and the person quoting Rav Kanievsky, also said that such a person cannot build a mikva (i.e. do the hashaka process of connecting the mikva water pit to the mikva pool), and a woman cannot supervise the immersion in the mikva if she has an iPhone.

And, he adds, in many places, such as in Jerusalem, mikvas are built by, and weddings and divorces or officiated by, the Rabbanut and religious councils, and they don’t ask such questions, so they cannot be relied upon – i.e. their mikvas, weddings and divorces must be assumed to be invalid. (source: Kikar)

So, we have eishet ish, mamzerim, passul mikvaot, boalei nidda and children of unions with nidda. 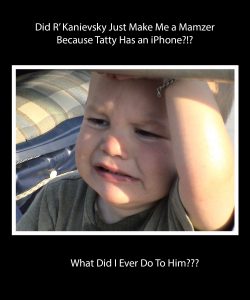 Rafi is right. If this were to be the case, then in its most serious ramification there would be thousands of invalid Gitin in the world. Which means the children of remarriages would be Mamzerim, and their parents will have unwittingly committed biblical level adultery.

Every single person reading this blog that ever witnessed a Get, know that you have increased Mamzerus in the world.

This Psak would include people like Rabbi Chaim Dovid Zweibel, executive vice president of Agudah, Agudah spokeman Rabbi Avi Shafran and most of Agudah’s membership – including (I’m sure) some of their more prominent rabbis.

Half (if not more) of the Charedi Mechanchim I know have smart-phones. It would probably include the entire membership of the RCA. I could go on, but you get the picture. There is no possible way Rav Kanievsky did this. This Feinhandler fellow is either lying to us, or he lied to Rav Kaneivsky.

Oh… I’m sure he asked him a question along these lines. But, Rav Kanieavsky or anyone of his age and stature wouldn’t know what a smart-phone was if it was staring them in the face. In light of that I strongly suspect that the question went something like this: Is a person who uses pornographic devices permitted to be a witness on religious documents? Since every single senior rabbinic leader in the world has come out so strongly against using such a device he probably considers them to be Mumrim L’Hachis – people who purposely violate Halachic directives of the rabbis. Such people are invalid witnesses.

Rav Kanievsky only knows what he has been told and reacted to that. Same as Rav Shmuel HaLevi Wosner at the Internet Asifa a few years ago. He has been told that there is an alarming number of Frum internet users that have been destroyed. Marriages have broken up. Children have gone OTD unprepared to handle the Apikursus they encounter… all because of this device.

If I knew nothing about the internet and someone came up to me and told me all that, I might feel the same way. Their understanding of the internet is that it a virtual Playboy Magazine – only worse. And that those who continue reading Playboy (even if it is only for the articles) knowing full well that the rabbis forbade it are Mumrim L’Hachis and to be treated accordingly.

Of course those of us who do use these devices know how ridiculous that understanding is. Most know how valuable it is…and how indispensable it has become. Eventually it will be more vital to our lives than the telephone. And most Charedim know that too.

One way or another, these Rabbinic leaders have been completely misled. I therefore fully reject this letter as either a complete lie or a Psak based on false information. It is not possible that a rabbinic leader of any stature who actually understands the reality of the situation would have ever said this.