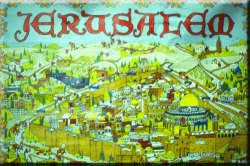 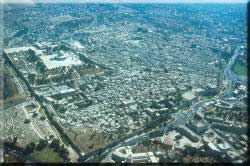 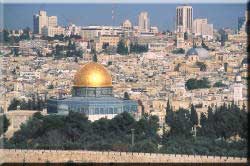 While the name Yerushalayim is not found in the Torah at all, and is first mentioned as one of the cities that was captured by Yehoshua when the Jews entered into the promised land, we do find it under another name, “Shalem,” which means peace or complete. When Avraham Avinu returned from the war against the four kings who had captured his nephew Lot, Malkei Tzedek (who was actually Shem the son of Noach) came out to greet him with bread and wine. Later on (by the Akeidas Yitzchok), Avraham named it Hashem Yirah, Hashem should see and choose. The Gemarah (Taanis) says that the name Yerushalayim is therefore a combination of these two names given to it by both Shem and Avraham.

The city of Yerushalayim was actually inhabited by the Yevusi (one of Canaan’s children) and it was first captured by Dovid HaMelech many years later. It was he that purchased the hill of Moriah from Aravna Ha’Yevusi for 600 shkalim and decided to use this former threshing floor to build the Bais HaMikdash on it. This turned Yerushalayim into the Jewish capital city for eternity. 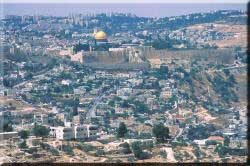 It was here that the first Bais HaMikdash built by Shlomo HaMelech stood for 410 years until it was destroyed by Nevuchadnetzer the king of Bavel.

Seventy years later the second Bais HaMikdash was built here by Ezra and Nechemya. It lasted for 420 years and was destroyed by the Roman General Titus. Archaeological digs have uncovered many remnants from those times.

To get a look at what Yerushalayim looked like during the time of the first Bais HaMikdash, one can visit a fascinating exhibit located on Rechov Shonei Halachot in the Jewish quarter of the old city.

To see what Yerushalayim looked like during the time of the second Bais HaMikdash, you can go to the Holy Land Hotel which is located near Bayit Vegan. Here you will see an impressive scaled down model of the Bais HaMikdash which also includes the cities walls, palaces, citadels and houses. Take along the enclosed guide which will give you a clear explanation of what you are seeing.