Right to the side of the Yaffo gate of the old city stands an enormous fortification referred to as Migdal Dovid (or David’s Citadel). We are not really sure who built the original fortification. According to Yosifus, it was build by the Yevusi who lived in this city before Dovid captured it from them. Perhaps Dovid, as well as King Chizkiyahu, strengthened it, since some remains from those days have been found here.

Towards the end of the second Beit Ha’Mikdosh, King Hordus (known as Herod), built three large towers here. He called the first of these towers “Phasael” after his brother. It stood more than 14 stories high. (About twice as high as it presently stands). The only part still left today is its large base. and a Turkish minaret which was built on it in much later times. To get an idea of what it once looked like, one should visit the model at the Holy Land Hotel. 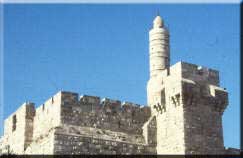 The Jews used this fortress during the Roman invasion in order to hold them back from entering. After the Romans succeeded in destroying the Beit Ha’Mikdosh, this was the place of the Jews’ last stand.

One must, however, note that the very large tower which stands next to Dovid’s Tower (and which everyone today mistakenly calls David’s Citadel) is actually not Dovid’s at all. This minaret was actually first built by the Turks in 1635. Why the picture of this Moslem tower was printed in some Jewish prayer books is quite strange, since it was actually only used by the Moslems to call their faithful to prayer!

Nowadays , one can climb to the top from where one gets a beautiful view of the old city. There is also an interesting historical exhibition depicting Jerusalem throughout the ages that one can view here, (There is an entrance fee).