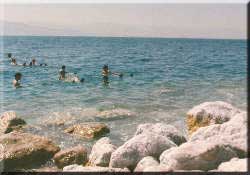 The Dead Sea lies between the mountains of Moav on the east and the Judeaan hills on the west. and gets its waters from the Yarden and Arnon rivers. It lies about 1,300 ft. below sea-level-the lowest point on earth, and the waters are rich in many types of salts (such as potash, bromine, etc.) which are extracted from it.

In very ancient times, the area of the Dead Sea was the most fertile region in the entire country known as the Kikar Ha’Yarden and was the area chosen by Lot, Avrohom’s nephew. Here stood the five wicked cities of Sdom, Amorah, Tzvaim and Tzoar, which were destroyed because of their great wickedness. The destruction was so great that the area turned into the Dead Sea which is mentioned as the eastern border of Eretz Yisroel. 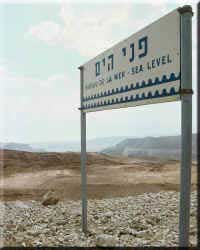 Here too, were large pits of quicksand into which some of the kings in the war with Avrohom fell into. This was called Emek Ha’sidim (see Beraishis 13:3).

Nowadays many people come to bathe in these waters because of their curative powers. It will help cure any cuts on your skin even though it will burn you . Because of the great salt content, one floats quite easily. Make sure not to get any water into your eyes because it really burns. If some water does get in, immediately wash it out with fresh water.