Note: The post was excerpted from a very X-tian website, but to their credit, they came up with amazing evidence on Purim as well as the rest of our Bible. We Jews normally aren’t too concerned about verifying history – that’s for other religions to pursue – but it’s always heartwarming to see evidence of what we read about every year! – Rafi 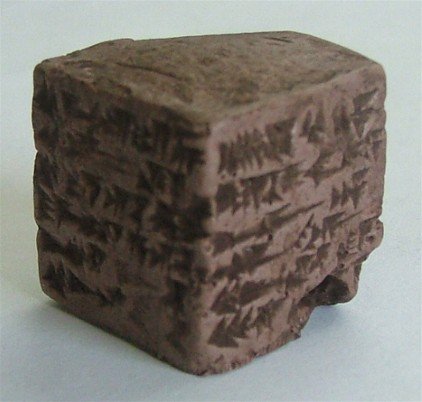 Persian Pur Dice – Purim, Lots, is stemmed from that

ESTHER 1:1 ~ 1And it was in the days of  Xerxes king. He was Xerxes that ruled over the
127 provinces from India to Ethiopia. King Xerxes ruled from his throne in the capital city of Susa.

The Persian empire is said to have spanned five million square miles.  Shushan/Susa  was 200 miles
east of Babylon.  It was the winter residence of Persian kings.  Its site was identified by Aracheologist
Loftus who found an inscription of Artaxerxes II (405-358 BC):  “My ancestor Darius built this
palace in former times.  In the reign of my grandfather [Artaxerxes I) it was burned. I have
restored it.”  Darius was Xerxes’ father.

ESTHER 1:3 ~ In the third year of Xerxes’ rule, he gave a party for his officers and leaders. The army
leaders and important leaders from all of Persia and Media were there.

Xerxes was crowned King of the Persian Empire in 486 BC.  Three years later, he began preparing
for his famous military expedition to Greece.  He needed his officers for the planning, organizing
and mustering of troops.

ESTHER 1:4, 6 ~ The party continued for 180 days [six months]. All during that time, King Xerxes was
showing the great wealth of is kingdom. And he was showing everyone  the majestic beauty and
wealth of his palace….That inside garden had white and blue linen hangings around the room. Those
hangings were held in place with cords of white linen and purple material on silver rings and marble
pillars. There were couches made of gold and silver. Those couches were setting on mosaic pavement
of porphyry, marble, mother-of-pearl, and other expensive stones.

Pictured here are glazed brick friezes from the walls of Xerxes’  palace in Susa.  The bottom one
depicts Persian archers.  They are now on display at the Louvre Museum in Paris. 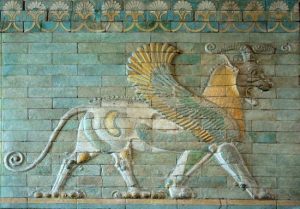 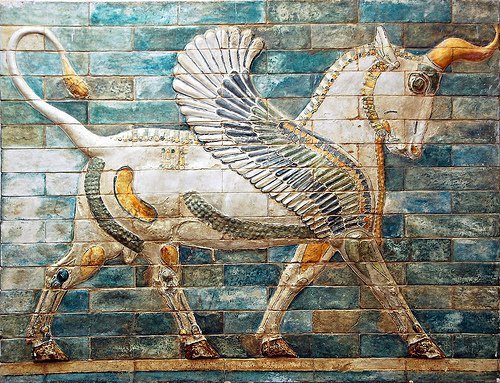 ESTHER 1:7 ~ Wine was served in golden cups. And every cup was different! And there was plenty of
the king’s wine, because the king was very generous.  The king had given a command to his servants.
He told them that each guest must be given as much wine as he wanted. And the wine server obeyed
the king.

Gold cup Owner John Webber says his grandfather gave him the 5.5-inch (14-centimetre) high cup to
play with when he was a child, back in 1945.  A few years ago he realized its true value and offered it
for auction.  It was evaluated to have been from ancient Persia. 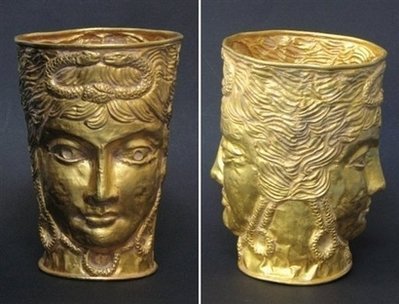 ESTHER 2:17-18 ~ The king loved Esther more than any of the other girls. And she became his
favorite. He approved of her more than any of the other girls. So King Xerxes put a crown on
Esther’s head and made her the new queen in Vashti’s place. And the king gave a big party for
Esther. It was for all his important people and leaders. He announced a holiday in all the provinces.
And he sent out gifts to people, because he was a generous king. 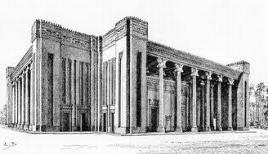 Much of the palace at Susa was destroyed by Alexander the Great.  Pictured is the remains of the
Great Gate.

ESTHER 3:7 ~ In the twelfth year of King Xerxes’ rule, in the first month, the month of Nisan, Haman
threw lots to choose a special day and  Adar was chosen. (At that time, the lot was called “pur.”) 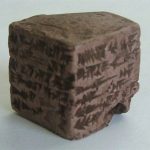 Pur is Persian for “Casting a lot”; Purim is the plural.  Pictured is a reproduction of a Pur belonging to
Iahali who was a high official of Shalmanesser III who ruled from 858-823BC.

Purim came in many forms in the ancient world ~ pebbles placed in a bag, wooden pieces with names
that were placed in a jar, or dice. They were used by many civilizations to invoke an answer from the
gods, not as chance but as direction.

ESTHER 5:1-2 ~ On the third day, Esther put on her special robes. Then she stood in the inside area
of the king’s palace. That area was in front of the king’s hall. The king was sitting on his throne in
the hall. He was sitting facing the place where people enter the throne room. Then the king saw
Queen Esther standing in the court. When he saw her, he was very pleased. He held out to her the
gold scepter that was in his hand. So Esther went in to the room and went near the king. Then she
touched the end of the king’s gold scepter.

This event occurred after the twelth year of Xerxes.  History lists a difference wife of Xerxes as being
the mother of the next king ~ Artaxerxes.  He had three children by unknown wives; one of those wives
was Esther.  Xerxes was murdered nine years after this event.

NOTE:  Xerxes also had an illustrious palace in Persepolis.  It is pictured in one of the attached galleries.

It was under Xerxes’ father, Darius, that the Jews were freed from captivity and allowed to return to Jerusalem to rebuild their temple  It was under Xerxes’ son, Artaxerxes, that more Jews were allowed to return to Jerusalem with financing to rebuild the city and the walls.  These events are covered in Ezra and Nehemiah above.  All is historically accurate.

Note: The post was excerpted from a very X-tian website, but to their credit, they came up with amazing evidence on Purim as well as the rest of our Bible. We Jews normally aren’t too concerned about verifying history – that’s for other religions to pursue – but it’s always heartwarming to see evidence of what we read about every year! – Rafi