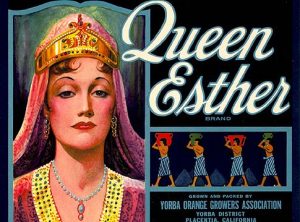 (Images borrowed from the crate labels of American grown oranges)

It is easy to spot Haman in today’s world. The Iranian Mullah’s with their destroy-Israel infatuation, a few European NGOs who back killers with the slogan of human rights, a PA which teaches its children to hate Jews and to detest life, to name a few…

But who is this year’s Esther?

My vote is with Scarlett Johansson. Scarlett, a world renowned actress, and hidden Esther-like Jew, stood up against EU and UN-types when she said goodbye to Oxfam in favor of the Israeli SodaStream. There was an element of a Purim-like turn around, when Oxfam tried to pressure Scarlett to drop SodaSteram, but this time, it was they who got the cut.

Why did she do it? She could not bring herself to project the Oxfam narrative about Arab oppression because she had seen the factories which employ satisfied Arabs, and hearing from them directly she understood what it would mean to lose their jobs in

the name of “liberation.”

In her own words she explained that, “SodaStream is a company that is not only committed to the environment but to building a bridge to peace between Israel and Palestine, supporting neighbors working alongside each other, receiving equal pay, equal benefits and equal rights. That is what is happening in their Ma’aleh Adumim factory every working day.” She defined Israel as the facilitator of normalcy while undermining the Israel-is–to-blame for everything account.

But what good could come to Scarlett by standing up for truth? On the face of it, very little. She could have gone on happily making movies without having to face the ire of bad guys, who no doubt, have the ability to threaten physical violence as well. Just stay out of it, its not your fight, why do you, a Hollywood starlet, need this Middle East headache?

And that is exactly why Scarlett wins the Esther Award – she did not need this headache, but still she used her position to publicly shame and expose the BDSers. As Mordechai said, “And who knows if for this time you were made queen?”

However, Scarlett’s actions did much more then defend the Jewish State. By said no to the narrative that Oxfam was drawing about Israel, she actually defended the world from accepting a general warped outlook which seeks to portray evil as good and good as evil. In Nazi Germany, it began by vilifying the Jew and extolling the Nazi party. Today, it begins by painting the oppressive Jihadists as freedom fighters, and Israel, the one shining light of hope for humanity in the Middle East, as the most evil force in the region. Experience shows that once these lies are accepted, the world is thrown into chaos and millions can die.

Scarlett bravely said no, and thereby stopped the lies from passing through her. Like Esther, she put herself on the line for truth, and like Mordechai, she would not bow down and give homage to the lies. And while it may have not seem like much, sometimes, just a sliver of courage is enough to put the bullies down, give the world another chance, and encourage a new generation to fight on for truth.