In modern-day English, the sentence above—written in fourteenth-century Middle English—means: “When he got close to the house, he heard a band and chorus.” About 400 years earlier, in Old English, the same sentence would have appeared as follows: “þā hē þām hūse genēalæhte, hē gehȳrde þone sweg and þæt weryd.”

One of the first rules one learns in historical linguistics is that all spoken languages are in a constant state of change; only the rapidity and significance of the changes vary. Indeed, everything in a language changes: the sounds, the morphology (word forms), the syntax (how words are put together to form a phrase) and even the intonation. Native speakers are aware of the different dialects of their own language. When a Brit talks about the “boot of the lorry” (the trunk of the truck), many Americans will have no idea what he means, even if they are able to understand the pronunciation.

This principle has several corollaries. One is that the more time passes, the more difficult it is to understand the older forms of a particular language. Another is that one language, whose speakers become separated from one another, will diverge, first into two dialects, and with time, into different languages. Spoken Latin diverged over time into many separate languages, of which Portuguese, Spanish, French, Italian and Romanian survived.

While we would all like to think that we read the Torah the same way our ancestors did three or four thousand years ago, the likelihood is that we don’t. As with other languages, Hebrew changed over time. Even in the time of the Shoftim, we find that members of different tribes pronounced Hebrew differently, as the story in Shoftim 12:5 illustrates. Today, three main traditional pronunciation systems of Hebrew have survived and are used in synagogues around the globe: Ashkenazic, Sepharadic and Teimani. (The Samaritan community also preserves its own Hebrew pronunciation, which differs greatly from the Jewish traditions.)

Since numerous and significant differences exist between the three traditional systems, the obvious question is: which pronunciation system adheres most closely to tradition? In other words, which is more “correct”?

This question has no simple answer. Unfortunately, there are no YouTube videos or vinyl recordings illustrating how Avraham Avinu or Moshe Rabbeinu spoke. No one can prove that one pronunciation system more accurately reflects how the Jews in Eretz Yisrael spoke thousands of years ago. We have only written evidence. Yet written records do not record the pronunciation of words (how would one know how to pronounce “laugh” correctly from written evidence alone?).

Unfortunately, there are no YouTube videos or vinyl recordings illustrating how Avraham Avinu or Moshe Rabbeinu spoke.

Hebrew uses the original alphabet, which was invented for Hebrew or a close cousin to it. As with other Semitic languages, only the consonants were written down (no vowels).  Around 700 ce, various systems for writing vowels were developed for Semitic languages, with each language developing distinct vowel symbols. Thus, despite the fact that Hebrew, Aramaic, Arabic and Amharic all share the same consonants—of course, the forms of the letters change over time, so nowadays the Arabic alphabet looks different than the Hebrew alphabet—they all have very different symbols representing vowels.

Obviously, one cannot discuss Hebrew pronunciation without first discussing Hebrew vowels. What most people don’t realize is that at least three different notation systems for denoting vowels (vowel symbols ornekudos) were invented for Hebrew, each in a different center of Jewish society. In manuscripts, one finds evidence of the “Babylonian vocalization” (developed in Bavel), the “Palestinian vocalization” (developed in most of Israel) and the “Tiberian vocalization” (developed in Tiberias, a center of Biblical scholarship at that time). The systems all came into being at around the same time. The Tiberian notation (which later was universally accepted) has seven different vowel symbols—the nekudos we are familiar with. The Babylonian vocalization has six vowels and the Palestinian has five. The traditional Sepharadic pronunciation most closely corresponds to the Palestinian notation, as it does not distinguish between the pasach and the kamatz. Nor does it distinguish between the segol and the tzere. Similarly, it is clear that the traditional Teimani pronunciation is descended from the Babylonian vowel notation system, since it uses only six vowel sounds. Most fascinating, until recently, Teimani scribes used the Babylonian nekudos. It is important to note that although the written vowels came about in 700 ce, they reflect a much older oral tradition. 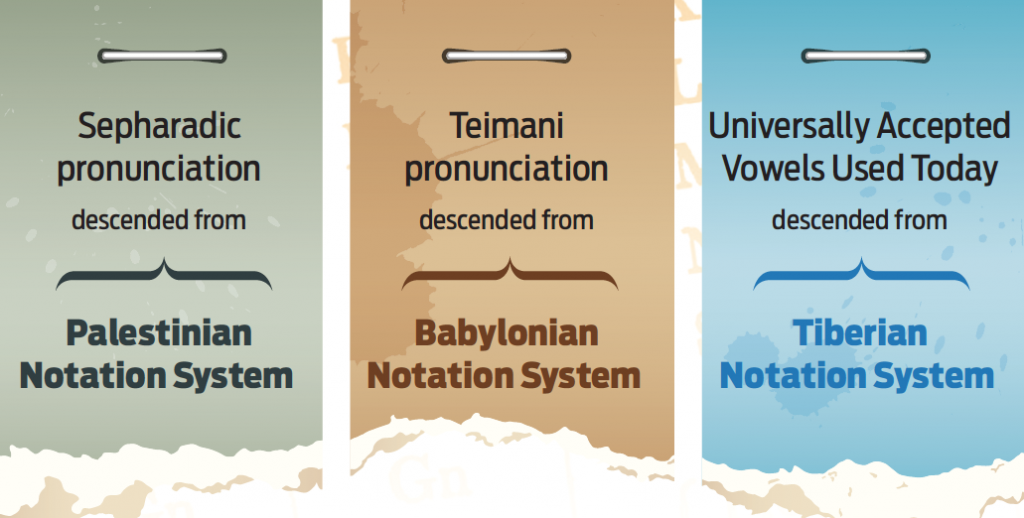 Why is the Tiberian notation system the only one still in use today? Because it was used in the Tiberian Masorah, which was considered the most authoritative. Thus, all Chumashim today adhere to the Tiberian system and feature the nekudos we are all familiar with.

Interestingly, Jews universally adopted the Tiberian nekudos, even though, for most groups, the vowel system did not correspond to their traditional pronunciation at all. Today, many Israeli children do not understand why there are two vowel signs, kamatz and pasach, when they are pronounced identically.

The Sages in the Gemara speak about errors in pronunciation. In Megillah 24b, Chazal state that residents of Beit She’an and Haifa who do not pronounce the ayin and alef correctly should not duchen (recite the Priestly Blessing for the congregation) or serve as the shaliach tzibbur (Shulchan Aruch, Orach Chaim, 53:12; 128:33).

In the twentieth century, due to sociolinguistic factors, other dialects came into being—first among them contemporary Israeli pronunciation. The father of Modern Hebrew, Eliezer ben Yehudah, and the proponents of reviving Hebrew (mostly secular Zionists) adopted the Sepharadic pronunciation of the vowels. They felt that the Ashkenazic pronunciation was tied to European Judaism and religious tradition, which they, for the most part, were rejecting. However, since European Jews had difficulty pronouncing the Hebrew consonants of the Sepharadim (the ayin and ches in particular), Modern Hebrew uses Sepharadic vowels but the Ashkenazic pronunciation of consonants (except that it does not differentiate between the hard and soft taf).

Mention must also be made of another new dialect that came about in the twentieth century: Chareidi Yeshivish Hebrew. This dialect, which evolved after the Holocaust, both in Israel and America, is a blend of the Lithuanian and Polish pronunciations, which ironically enough originated with the Yiddishists. In the early part of the twentieth century, the Yiddishists set out to standardize Yiddish pronunciation by combining elements of Lithuanian and Polish pronunciation of Yiddish. This pronunciation was subsequently adopted by the Yeshivishcommunity. Of course, no one from Slabodka, Radin, Mir, Lublin, Pressburg or Satmar ever used this dialect in Europe.

Getting back to our original question: which is the “correct” pronunciation? From a linguistic point of view, any of the three ancient pronunciation systems mentioned above that are found in manuscripts could be candidates, but we have no recordings of what exactly they sounded like. Linguistically, there is absolutely no way of deciding among them, but historical linguistics indicates that in all probability each has some original elements as well as some changes. So which one is correct? What does “correct” mean in this context? What Chazal spoke?  Well, Chazal’s Hebrew was very different from Biblical Hebrew in morphology, syntax, phonology and, in all probability, in pronunciation as well.

Most people would probably say that “correct” means the way Moshe Rabbeinu pronounced Hebrew. Since we have no way of knowing which pronunciation he used, the pronunciation one uses today depends on how one was taught, on his family tradition or on sociolinguistic considerations, such as does one want to identify with modern Israeli society or with Chareidi society? For English speakers, this conundrum should be easy to grasp: which is the “correct” pronunciation of English?  Texan? Chicagoan? Bostonian?

Given that there is no certainty regarding the authenticity of one tradition over another, it is not surprising that most posekim, including Rabbi Yitzchak HaCohen Kook—despite his nationalistic bent and positive feelings toward the revival of the Hebrew language—took the position that one may not change his ancestral custom regarding pronunciation.

Years ago, when I first started leining at the Maimonides Minyan, a Shabbos minyan held at Maimonides School in Boston under the guidance of Rabbi Joseph Ber Soloveitchik, I asked the Rav about my pronunciation. With my Eastern European background, I was accustomed to using the Ashkenazic pronunciation. However, I had had a Kurdish Hebrew tutor and therefore pronounced the ayin and ches using the Sepharadic pronunciation. The Rav told me that while we cannot know which pronunciation is more authentic than the next, the Gemara rules that one must differentiate between an ayin and an alef. Since most Ashkenazim (the Rav included himself) cannot pronounce the ayin, they are not required to do so when praying, but since I could, I was obligated to. Similarly, he insisted that I make a distinction between a chesand a chaf, as pronunciation affects the meaning of words. The Rav did not encourage me to use the Sepharadic vowels, because the Sepharadic pronunciation makes no distinctions between certain vowels. This is similar to the position taken by Rabbi Yosef Henkin (Eidus LeYisrael, p. 156-157), who says that one should adopt the Sepharadic pronunciation of the consonants but not the vowels.

At the end of the day, I can do no better than quote Rabbi Elazar Mayer Teitz, rav and dean of the Jewish Educational Center in Elizabeth, New Jersey, who, upon hearing that I would be writing about the taf and thesaf, noted the Hebrew expression “Sof tov, hakol tov, If it ends well, everything is good.” Dare we say “Saf/taf, hakol tov?”

Special thanks to Jay Rovner, PhD, manuscript bibliographer, The Library of the Jewish Theological Seminary.

Rabbi Dr. Seth Mandel is a rabbinic coordinator at OU Kosher. He has a PhD in Semitic languages from Harvard University and has taught Hebrew, Aramaic and other languages in various universities.

To read more on this subject, visit http://www.ou.org/jewish_action/03/2014/fighting-taf-guys/.