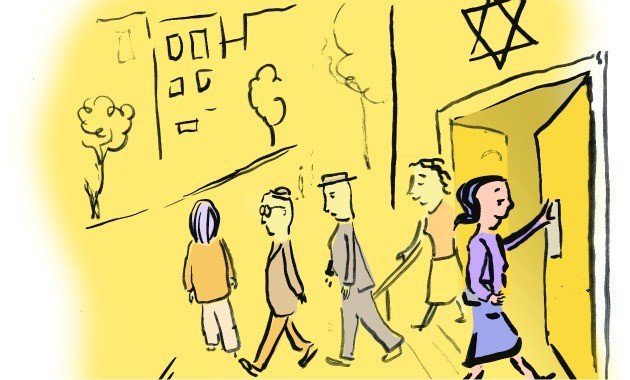 Photo courtesy of Kurt Hoffman of the Jewish Daily Forward

Recently I went through the first Perek of Pirkei Avos during a Kiddush at someone’s house and came to the conclusion that the whole thing can be an allegory for a Shul Kiddush (e.g. schapps, cholent, etc.). Here’s how.

This might be considered as Purim Torah, but still.

This applies when inviting people to a Kiddush, regulating their alcohol intake, and teaching masoretic Torah that won’t alienate some.

2. Shimon the Righteous was among the last surviving members of the Great assembly. He would say: The world stands on three things: Torah, the service of G-d, and deeds of kindness.

Torah: making a kiddush and giving a Dvar Torah so people can feel the love and warmth of it.

Service of Gd: the Kiddush in someone’s name to elevate it, thereby elevating that spark of Gdliness.

Deeds of kindness: inviting everyone to the Kiddush.

When serving a Kiddush (paid out of your own pocket), know that Jewish vultures will consume food bought with your your hard-earned money without thanking you. Do it Lishmah and Hashem will look kindly on you.

Bring in a Rabbi to deliver a good Dvar Torah while everyone has fressed and drank.

5. Yossei the son of Yochanan of Jerusalem would say: Let your home be wide open, and let the poor be members of your household. And do not engage in excessive conversation with a woman. This is said even regarding one’s own wife–how much more so regarding the wife of another. Hence, the sages said: One who excessively converses with a woman causes evil to himself, neglects the study of Torah, and, in the end, inherits purgatory.

Same thing – include everyone at the Kiddush. If women are invited, establish a Mechitzah so they can enjoy it.

The master is the bill for the Kiddush, your friend is the one who will help foot the bill, and everyone is fressing because they haven’t seen food in their life, nu nu?

7. Nitai the Arbelite would say: Distance yourself from a bad neighbor, do not cleave to a wicked person, and do not abandon belief in retribution.

When announcing the Kiddush, don’t worry about forgetting to tell that neighbor you just don’t like. However, what goes around comes around when that neighbor makes a Kiddush and doesn’t invite you back.

When someone breaks your special plate or bottle of schnapps that would cost a fortune to replace, make everyone help foot the bill.

9. Shimon the son of Shotach would say: Increasingly cross-examine the witnesses. Be careful with your words, lest they learn from them how to lie.

Be careful with your words: don’t overdrink as you need to be the most alert when hosting a Kiddush, especially when it comes to cross-examining who-did-what-first.

10. Shmaayah and Avtalyon received from them. Shmaayah would say: Love work, loath mastery over others, and avoid intimacy with the government.

Love making the Kiddush, don’t try to talk to other guests in a condescending manner, and avoid Shul politics.

11. Avtalyon would say: Scholars, be careful with your words. For you may be exiled to a place inhabited by evil elements [who will distort your words to suit their negative purposes]. The disciples who come after you will then drink of these evil waters and be destroyed, and the Name of Heaven will be desecrated.

The person issuing the Dvar Torah should be careful what he says, keeping the discussion “middle of the road” or pareve. Otherwise those drinking schnapps in the presence of this person may choke on it, thereby drinking “evil waters.”

12. Hillel and Shammai received from them. Hillel would say: Be of the disciples of Aaron–a lover of peace, a pursuer of peace, one who loves the creatures and draws them close to Torah.

Focus on the Kiddush in bringing in love, peace and Torah, being L’Ilui Nishmat the person that the Kiddush is for.

King David also said, “Al Tivtechu BaNedivim” (don’t rely on donors). If you want to make a killer Kiddush do it yourself.

15. Shammai would say: Make your Torah study a permanent fixture of your life. Say little and do much. And receive every man with a pleasant countenance.

At a Kiddush, keep a Sefer by you, don’t say much, and smile at everyone.

16. Rabban Gamliel would say: Assume for yourself a master; stay away from doubt; and do not accustom yourself to tithe by estimation.

When quoting a Rav, stick by him like glue without second-guessing. Be exact in your quoting without trying to “gist” it.

17. His son, Shimon, would say: All my life I have been raised among the wise, and I have found nothing better for the body than silence. The essential thing is not study, but deeds. And one who speaks excessively brings on sin.

Say little and do much. When being L’Ilui Nishmat someone, it’s better to host a Kiddush rather than simply sitting down and studying. At least at a Kiddush more people will notice the person it’s in honor of.

18. Rabbi Shimon the son of Gamliel would say: By three things is the world sustained: law, truth and peace. As is stated (Zachariah 8:16), “Truth, and a judgement of peace, you should administer at your [city] gates.”

Keep things at your Kiddush clean, though the dozens of people can have a potential of items and people getting destroyed.

Last but not least, there are 18 (Chai) Pesukim in the first Perek, corresponding to the “L’Chaim’s” being uttered.