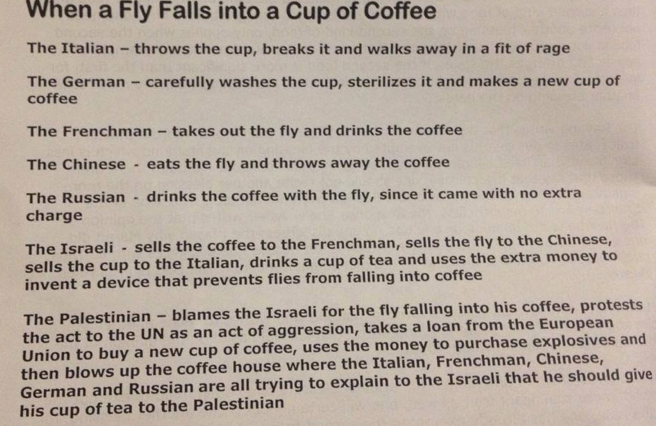 The Italian – throws the cup, breaks it and walks away in a fit of rage.

The German – carefully washes the cup, sterilizes it and makes a new cup of coffee.

The Frenchman – takes out the fly and drinks the coffee.

The Chinese – eats the fly and throws away the coffee.

The Russian – drinks the coffee with the fly, since it came with no extra charge.

The Israeli – sells the coffee to the Frenchman, sells the fly to the Chinese, sells the cup to the Italian, drinks a cup of tea and uses the extra money to invent a device that prevents flies from falling into coffee.

The Palestinian – blames the Israeli for the fly falling into his coffee, protests the act to the UN as an act of aggression, takes a loan from the European Union to buy a new cup of coffee, uses the money to purchase explosives and then blows up the coffee house where the Italian, Frenchman, Chinese, German and Russian are all trying to explain to the Israeli that he should give his cup of tea to the Palestinian.

← Josh Orlian: 12-Year-Old Standup Comedian Gets Naughty on AGT Stage – America’s Got Talent 2014
The Kidnapping Truth: The Boys Were Not Hitchhiking →