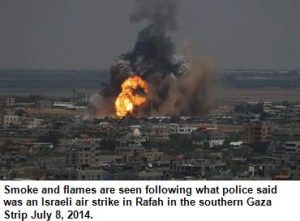 Hamas apparently expected a limited response to the recent rocket attacks on Israeli cities and towns; The organization is concerned the IDF’s operation could be the end to Hamas’s rule over the Gaza Strip.

Despite fiery statements issued by Hamas spokesmen over the past 48 hours, it was obvious Tuesday night that the Islamist movement was searching for ways to rid itself of the current escalation.

Hamas feels that it has been forced into a confrontation with Israel – one that it did not want at this stage because of its increased isolation and financial crisis.

The massive Israeli air strikes on the Gaza Strip over the past 24 hours have surprised Hamas and other Palestinian groups. Hamas apparently expected a limited response to the recent rocket attacks on Israeli cities and towns. But as the IDF intensified its strikes against Hamas targets – including the homes of some of its top commanders – it became clear to the movement’s leaders that Israel means business.

On Tuesday night, Hamas spokesmen were sending distress signals to various parties. The organization is concerned that if the IDF operation continues for another few days, the movement will pay a very heavy price – one that could even bring about an end to Hamas’s rule over the Gaza Strip.

Hamas accused Israel of “crossing all the redlines” by bombing the homes of its military commanders. This shows that Hamas did not expect Israel to take such a drastic move. Less than 24 hours after the beginning of the IDF offensive, Hamas talked about the need to return to the truce that was reached with Israel in 2012.

A spokesman for Hamas’s armed wing, Izzadin Kassam, listed this demand as part of his movement’s effort to end the current confrontation. The spokesman called for an end to the IDF crackdown on Hamas members in the West Bank, which began after the abduction and murder of three Israeli youths last month.

On Tuesday night, Hamas and other Palestinian groups appealed to Egypt and Arab countries to intervene to stop the IDF operation. Given Hamas’s bad relations with the Egyptian authorities, it’s unlikely that President Abdel Fattah al-Sisi would rush to save the movement that is openly aligned with his enemy, the Muslim Brotherhood.

The Palestinian Authority, which has condemned the Israeli “aggression,” is also unlikely to make a big effort to save Hamas from destruction. In fact, President Mahmoud Abbas and his Fatah faction would be happy to see Hamas severely defeated.

Hamas is beginning to feel the heat and that’s why its leaders, who have gone into hiding, are seeking an “honorable” way out of the confrontation, which, they say, they didn’t want to begin with.

← Rabbi Amnon Yitzhak Says Kidnapping, Rockets On Israel Divine Punishment For Gay Parade
YOU ARE PART OF THE STORY →