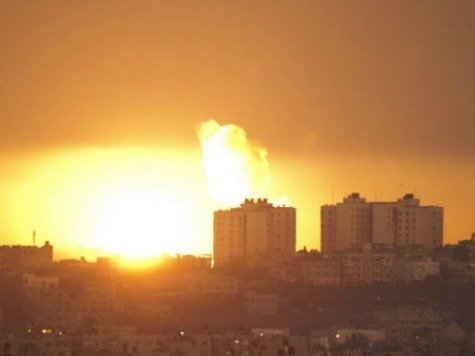 Operation Protective Edge may look like its predecessors–Operation Cast Lead in 2008-9 and Operation Pillar of Defense in 2012–in that it is a response to Palestinian terrorism launched from Gaza against Israeli civilians. The previous two rounds of the conflict ended with Hamas still in power in the Gaza Strip, weakened but able to re-arm over time and to project a strategic threat. There are five reasons, however, this time may be different.

1. By Attacking Tel Aviv and Jerusalem, Hamas Has Invited Its Own Destruction. By launching its Iranian-and Syrian-made missiles against Israel’s two major cities–especially Tel Aviv, normally a safe distance from conflict–Hamas has broken the unwritten rules of the game. It has long been known that Hamas in the south and Hezbollah in the north had the ability to reach those cities. But those groups had not exercised it.

Now that Hamas has shown it is willing to attack Israel’s commercial, spiritual, and political centers, the terror group has left Israel no choice but to destroy it completely. There is no way Israel can accept life under an active threat of rockets, enjoying safety only at Hamas’s whim. Attacking border towns like Sderot–or even, as in 2006, a northern city like Haifa–is one thing. Attacking Tel Aviv is a provocation Israel cannot ignore.

In particular, Netanyahu must maintain Israel’s deterrent. While he needs to keep forces at the ready in case of an attack from Hezbollah, or a more direct escalation by Iran, he knows that if he fails to show that Israel is ready to defend itself, he will strengthen Tehran. With nuclear negotiators just days away from their deadline for a (bad) deal, Netanyahu needs to maintain pressure on Iran–and remind the U.S. it can act on its own.

2. Obama Is on the Wrong Side–and Irrelevant. On the first day of Operation Protective Edge, President Obama published an op-ed in the left-wing dailyHa’aretz calling for “restraint” and a Palestinian state. As if to make clear that the publication was not an accident of timing, a senior Obama adviser gave a harsh speech to a peace conference in Tel Aviv the same day at which he blasted Israel for continuing to occupy the West Bank.

These gestures–informed, as usual, by misleading Palestinian demographic statistics that falsely predict Arab majorities in the near future–send the message that the White House disapproves of Israel’s operation and its general strategic posture. Normally, that would be very bad news for Israel. But it may help, ironically, because Obama has already alienated Israel to such an extent that the Israeli government feels at liberty to ignore him.

In addition, Israel previously held back due to political considerations in the U.S., cutting Cast Lead short in time for Obama’s inauguration, and postponing Pillar of Defense until Obama’s re-election campaign was over. This time conflict has erupted at the height of the midterm elections, meaning that anything Obama tries to do to stop Israel will boost Republican criticism of his foreign policy, and place Democrats in a tough spot.

3. None of Hamas’s Usual Allies Are Going to Help. Egypt, which as of last year was controlled by a very Hamas-friendly Muslim Brotherhood, is now run by Abdel Fattah el-Sisi, who led a military coup that pushed the Muslim Brotherhood out of power, cutting off a critical source of military and diplomatic support. The fact that Hamas is the Palestinian branch of the Muslim Brotherhood means Sisi has no love for the organization.

Iran might normally be expected to help, especially by smuggling weapons and stirring up Hezbollah to create a potential second front for Israel in Lebanon. However, Iran is tied down in fighting to defend the Assad regime in Syria and the Maliki regime in Iraq. Syria has long since expelled Hamas from Damascus, and Jordan is too preoccupied with the threat of ISIS to care. Even ISIS is too busy to make Israel a priority. Hamas is on its own.

4. Iron Dome Has Neutralized Hamas’s Offensive Arsenal. Though Hamas targeted Tel Aviv and Jerusalem, those two cities have (thus far) emerged unscathed, thanks to the effectiveness of Israel’s Iron Dome system, which tracks and destroys small, short-range projectiles. (Here the Obama administration will try to take some credit for Israel’s security, although the project had U.S. support before Obama came to power.)

The other weapon Hamas still retains is kidnapping. It is still a potent threat, as last month’s abduction and murder to three Israeli teens shows. Yet to carry out that threat, Hamas must either rely on infiltrating from Gaza, which has become very difficult, or on activating terror cells in the West Bank, where the Israeli military operates relatively freely. There is a reason Hamas is resorting to its best weapons first: it is rather desperate.

5. There is Israeli Support for Invading Gaza. Or, rather, Netanyahu will pay a political price if he fails to do what is necessary to oust Hamas. That could include re-occupying Gaza for some time–not re-introducing the settlements that were abandoned in the 2005 disengagement, but enforcing stability and preventing Hamas from operating militarily or politically in the Strip, withdrawing only once its terror infrastructure is destroyed.

The Israel peace camp has become a joke. On Tuesday, attendees at a conference of peace activists physically assaulted one of Israel’s conservative leaders. Though a few die-hards–including Israel’s outgoing President Shimon Peres–will stress the importance of negotiations and a two-state solution, the more potent political threat is on Netanyahu’s right, ready to exploit impressions that he has not done enough to secure Israel.

← IDF: Hamas Commanders Now Homeless
The IDF is Getting Ready for Battle…Enemies of Israel Beware →