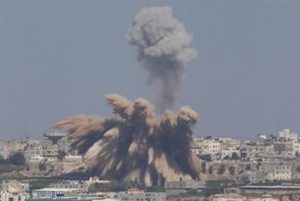 Since the beginning of Operation Protective Edge three days ago, the IDF has over 750 terror targets in Gaza – more than in the entire six days of 2012’s Operation Defensive Shield. In just the past 24 hours, the army said, 322 terror targets were destroyed, including 217 rocket-launching sites, as well as the homes of 46 Hamas commanders. According to IDF sources, the homes of nearly all of Hamas’ senior field commanders have been destroyed, rendering them and their families homeless.

Since the beginning of the operation, the IDF has hit 513 missile-launching sites. Officials said that the rate of attack against Hamas targets was double that of Defensive Shield, when the IDF pounded Gaza in response to months of endless rocket attacks.

As of Thursday morning, 257 rockets fired by Gaza terrorists have fallen on Israel. A rocket was fired at Ashdod overnight Wednesday, and was destroyed by an Iron Dome missile. Seventy-four Israelis have beentreated for shock.

On Thursday morning, a report said that the IDF eliminated three top Islamic Jihad terrorists. The three were eliminated when an Israel Air Force plane targeted the vehicle they were riding in.

According to Hamas sources, about 70 people have been killed in the IDF response to the ongoing rocket fire on Israeli cities. Hamas claims that “many” civilians are among the victims. The IDF said that it has been targeting only military installations and the homes of top Hamas commanders, and that residents of homes get phone calls in advance of the attacks. If any civilians are killed in the attacks, said Israeli officials, it’s because Hamas terrorists are using them as human shields.