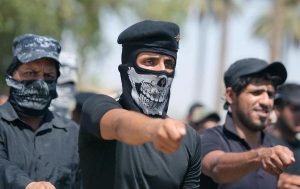 In a letter obtained by Reuters, Ambassador Mohamed Ali Alhaki asked U.N. Secretary-General Ban Ki-moon for help to ”stave off the threat of their use by terrorists in Iraq or abroad” after Mosul University, where nearly 40 kilograms of uranium compounds were kept, was targeted by insurgents.

“Terrorist groups have seized control of nuclear material at the sites that came out of the control of the state,” Alhakim wrote, according to Reuters, adding that such materials “can be used in manufacturing weapons of mass destruction.”

Shiite Muslim volunteers from the Iraqi Ketaeb (brigade) Hezbollah, march as they join the Iraqi army to fight against jihadist militants of the Islamic State (IS), formerly known as the Islamic State in Iraq and the Levant (ISIL), on July 9, 2014, in Baghdad. (Al-Rubaye/AFP/Getty Images)
“These nuclear materials, despite the limited amounts mentioned, can enable terrorist groups, with the availability of the required expertise, to use it separate or in combination with other materials in its terrorist acts,” he reportedly continued.

According to Reuters, Alhakim warned that the materials could be smuggled out of Iraq.

“The Republic of Iraq is notifying the international community of these dangerous developments and asking for help and the needed support to stave off the threat of their use by terrorists in Iraq or abroad,” Alhakim wrote, according to Reuters.

The news comes as the militant Islamic State, previously called the Islamic State in Iraq and Syria, continues to take control of large swaths of Iraq.

Nonetheless, a U.S. government source familiar with the matter offered Reuters some calming news, saying that since the materials seized were not believed to be enriched uranium it would be difficult to manufacture a weapon.