Projectile lands in Ashkelon, injuring 16-year-old; IDF urges tens of thousands of civilians in Strip to leave ahead of intensified air strikes on rocket launchers. 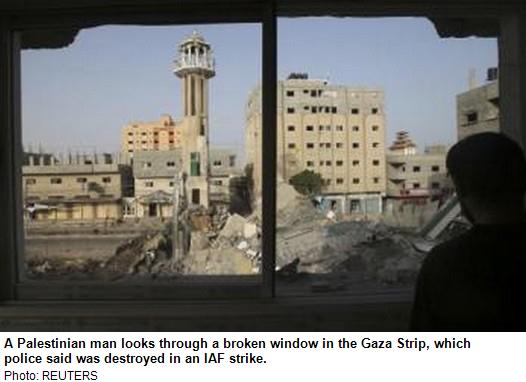 A fresh slew of rockets were fired from Gaza at southern Israel on Sunday morning as the IDF alerted tens of thousands of residents in northern Gaza to vacate the area by noon ahead of more intensive IAF attacks on rocket launchers and commanders there.

“This is a place that fires significantly more rockets than other areas. We plan to increase our attacks,” an army source said. People were still leaving the Beit Lahiya area and the IDF had yet to launch the promised attacks an hour after the deadline had passed Sunday.

Meanwhile, a rocket fired into Israel from the Gaza Strip landed in Ashkelon on Sunday shortly after noon, causing moderate-to-serious injuries to a 16-year-old boy and lightly wounding another person.

Large numbers of police forces were present at the scene.

The IDF Spokesman’s Unit released an English translation of the leaflet the military said it was dispersing to residents in northern Gaza, urging them to move away from Hamas operatives and command centers used by the terror group.

“It’s our assessment a huge majority of rockets are being launched (at Israel) from northern areas” in Gaza, said IDF spokesman Peter Lerner.

The IDF has struck 200 targets in Gaza over the past 24 hours, including 53 underground rocket launchers, 11 rocket production and storage centers, and nine Hamas command and control centers, a military source said. Five training camps were among the targets.

Since Sunday morning, the IDF has carried out a series of targeted strikes in the Gaza Strip, the military’s spokesperson said.

The IDF has targeted Hamas bases of operation in the Strip, including a building used by one of its operatives in Beit Lahiya.

The military also said it destroyed a building in Beit Lahiya used by Islamic Jihad to launch rockets into Israel.

Some 1,320 targets have been hit since the start of the six-day operation to extinguish Hamas fire on Israeli cities, including 735 underground rocket launchers, 130 command and control centers, 163 tunnels, 64 training camps, and 58 rocket storage and production centers.

There are 154 casualties in Gaza, the source said, two-thirds of whom are combatants, he added.

During one of the strikes early on Sunday, a house belonging to Hamas police chief Taysir Al-Bardge was targeted due to the presence of weapons in it, the source said. Twenty one people, who may have come out of a nearby mosque just as the strike was underway, were killed in the bombing, the source stated.

Addressing the naval commando raid on a long-range rocket facility in Gaza overnight, the source said, “We are deploying special forces in Gaza. The commandos were ordered to deal with long-range rockets, and came under fire during the raid. They completed their mission, and combat helicopters simultaneously fired on targets [in the area] that were chosen ahead of time,” he added.

The source said several Palestinian gunmen were hit by the commandos’ return fire during the raid.

Turning his sights to the North, the source said that a Palestinian organization fired three rockets from Lebanon into Israel on Saturday, adding, “We are sure it was not Hezbollah. We are keeping our eyes open in the Northern Command,” he said.

Meanwhile, he said, the West Bank sector has become stable and clashes there has dropped in comparison to June.

Jpost.com Staff and Reuters contributed to this report.