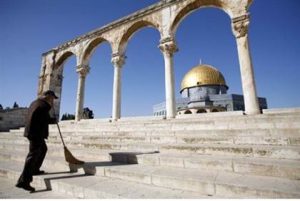 The Mukhtar (Islamic religious leader) of the Jerusalem neighborhood of Sur Baher on Monday praised Israel for defending the city – and particularly the Al-Aqsa mosque on the Temple Mount – from Hamas rockets.

Just days after wide-scale riots by Jerusalem Arabs over the murder of Arab youth Mohammed Al-Khder, Zuheir Hamadan said that Hamas, which claimed to be “defending” the Arabs of Jerusalem, was doing quite the opposite.

“Israel is the one defending Al-Aqsa from the missiles of Hamas,” Hamadan said. Speaking to Israel Radio’s Arabic service, Hamadan said that Hamas’ seemingly careless firing of missiles endangered Muslim holy places, as well as Arabs, who live and work in all parts of the country.

Red Color alert sirens have sounded several times over the past few days in Jerusalem and Gush Etzion. According to several reports, rockets have fallen in both Hevron and Ramallah.

Security officials confirmed that at least one rocket that was fired at Jerusalem missed and fell in a neighborhood in Arab-controlled Hevron. No one was reported killed, but several buildings were damaged, residents said. The Iron Dome system was not activated against that missile.